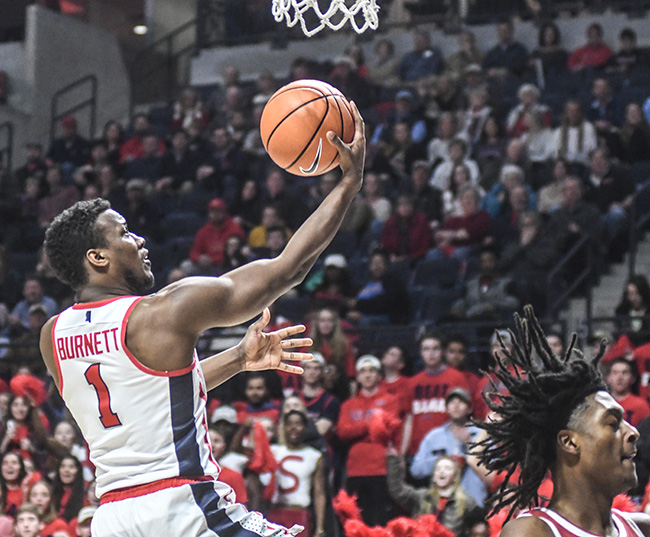 Ole Miss' Deandre Burnett (1) scores against Alabama's John Petty (23) at the Pavilion at Ole Miss in Oxford, Miss. on Tuesday, January 23, 2018. The basket put Burnett over the 1,000 point mark for his collegiate career. (Bruce Newman, Oxford Eagle via AP)

Ole Miss was bloodied for a minute. Actually, it was nearly eight minutes.

But the Rebels absorbed Alabama’s haymaker Tuesday night and punched back with a blow the Crimson Tide never recovered from to continue their winning ways at home against the SEC.

Ole Miss eventually buckled down on defense and took control against Alabama, pulling away for a 78-66 victory at The Pavilion. The win snapped a two-game losing streak for the Rebels, who improved to 4-0 in league games at home with their second top-50 RPI win.

The Rebels (11-9, 4-4 SEC) led by as many as 15 in the second half and outscored Alabama (13-7, 5-3) 60-39 after facing a nine-point deficit with 6:14 left in the first half, shooting 54.5 percent from the floor in the second half to withstand an 18-0 onslaught from Alabama at one point to end the Crimson Tide’s four-game winning streak. Ole Miss also extended its home winning streak against Alabama to seven straight dating back to 2010.

“We were able to take that punch and showed what we’ve been doing all year, staying together in this building and fighting back,” said Ole Miss guard Deandre Burnett, who scored a game-high 24 points, going 7 of 11 from the floor and 4 of 5 from 3-point range.

Alabama got 14 points from Donta Hall and 10 points from Dazon Ingram, but freshman point guard Collin Sexton was largely ineffective in his first action in more than a week after missing two straight games with an abdominal injury. The SEC’s second-leading scorer came in averaging 19.3 points but finished with just seven points on 2 of 13 shooting in 20 minutes off the bench.

“We prepared for (Sexton) to go, and he’s obviously a handful with his straight-line driving ability, but he wasn’t finishing at the rate he normally does,” Ole Miss coach Andy Kennedy said. “Some of that was rust, and some of that was us putting bodies on him.”

The Crimson Tide came in with the SEC’s fourth-best field-goal percentage, but Ole Miss held Alabama to just 40 percent shooting from the floor, including 28.6 percent from 3-point range. The Rebels also forced the Crimson Tide into 11 turnovers, scoring 22 points off of them.

“They put more pressure on us, and we turned the ball over along the sideline specifically,” Alabama coach Avery Johnson said. “We just didn’t do a great job of getting organized, and we didn’t have great shot selection.”

Burnett ended the drought with a corner 3 that sparked a 14-0 answer from the Rebels, who made six of their final nine shots to end the half on a 23-4 run for a 41-31 lead at the break. Alabama opened the second half with an 13-4 spurt to get back within one possession, but Ole Miss responded with back-to-back baskets and stretched the lead to 10 with 9:49 left with Alabama getting within single digits just twice the rest of the way.

“Really proud of our guys to take that punch and to come right back and finish the (first) half strong,” Kennedy said. “Next thing you know I think (the lead) got down to one, and we responded.”

Sexton checked in for the first time with 12:56 left in the first half and drained a 3 a few minutes later as part of the Tide’s surge, but the 6-foot-2 guard, who’s widely projected to be a first-round pick in this year’s NBA Draft, didn’t make another basket until Alabama trailed by 10 with 3:23 left in the game.

“There were some spots there where he just looked like his rhythm wasn’t there,” Johnson said. “He’ll get it back, and he’s a very important part of our team.”

Next up for Ole Miss is another top-50 RPI opportunity on Saturday with a trip to Texas (1 p.m., ESPN2) as part of the SEC-Big 12 Challenge. Ole Miss is 0-4 in true road games this season.