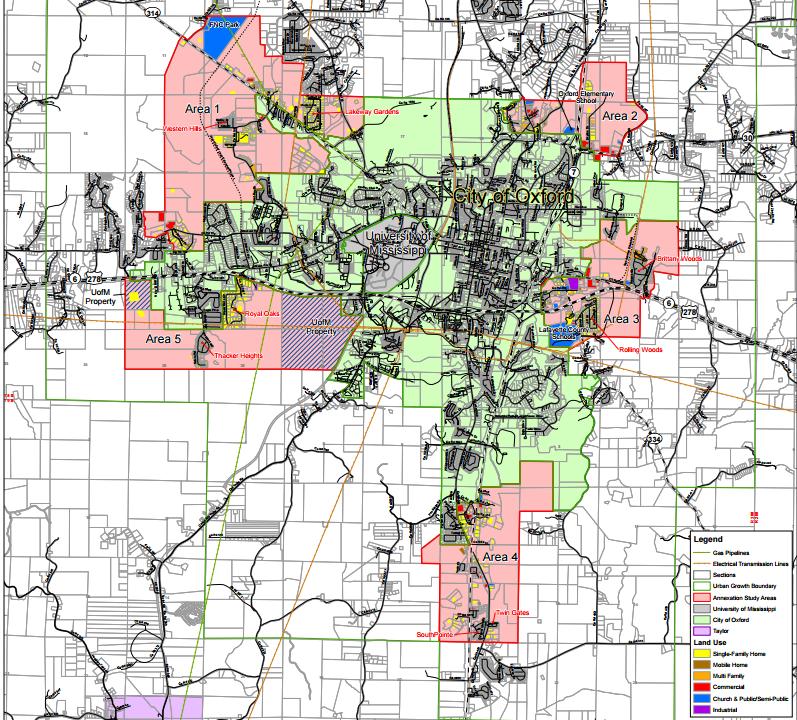 Maps of the five areas of Lafayette County that city of Oxford officials are looking to annex will be available for viewing by the public next month during a public meeting.

The maps will be on display from 5:30 to 7 p.m. on Feb. 15 at the Oxford Conference Center, announced Mayor Robyn Tannehill Monday during a recessed meeting of the Oxford Board of Aldermen.

Last week, Mike Slaughter of Slaughter and Associates in Oxford, an urban planning consulting firm, presented a report to the Oxford Board of Aldermen that showed five areas that have been selected for annexation.

“We will have the first reading of the intent to annex at our Feb. 6 meeting,” Tannehill said. “Then the public is invited to view the maps at the conference center, giving citizens an opportunity to ask our staff questions.”

A second reading and public hearing will be held on Feb. 20 at the aldermen’s regular meeting, where citizens will be given another chance to ask questions and make comments.

“We’ll take the information and comments from those meetings and then decide if we need to adjust the ordinance,” Tannehill said.

Depending on whether changes are needed, a vote to move forward with the annexation could take place on March 6.

City Attorney Pope Mallette said Monday that after the aldermen vote to move forward and draw up legal descriptions for each area, the city will file a petition to annex in the Lafayette County Chancery Court where a judge will set a hearing date. If no objections are made and the judge rules in favor of the annexation, and no appeal is filed, Mallette said it’s possible the annexation could go through by late September or early October.

However, if objections or an appeal are filed, the annexation could be delayed by a year or more.

Having the public able to view maps of the proposed areas for annexation is an important step to help ward off objections, Tannehill said.

If the city annexed all the land in the study areas, it would add 12 square miles to the city. Currently, Oxford is 16 square miles. The population would increase by 3,600 people. Much of the proposed annexation areas are undeveloped.

“This is our best shot at being able to offer affordable housing options within the city limits,” Tannehill said Monday.

Slaughter also informed the aldermen that the annexation would not change where children attend school.

“It won’t change where they attend school one bit,” he said. “If they currently go to county schools, they would continue to attend those schools.

With Lafayette County adopting a zoning ordinance this week, Slaughter said there’s been some confusion as to how the annexed land would be zoned.

“The Oxford Planning Department would be enforcing two zoning codes until rezoning goes through the process of public hearings to establish the city’s zoning in those areas,” Slaughter said, who also created the zoning ordinance for Lafayette County.