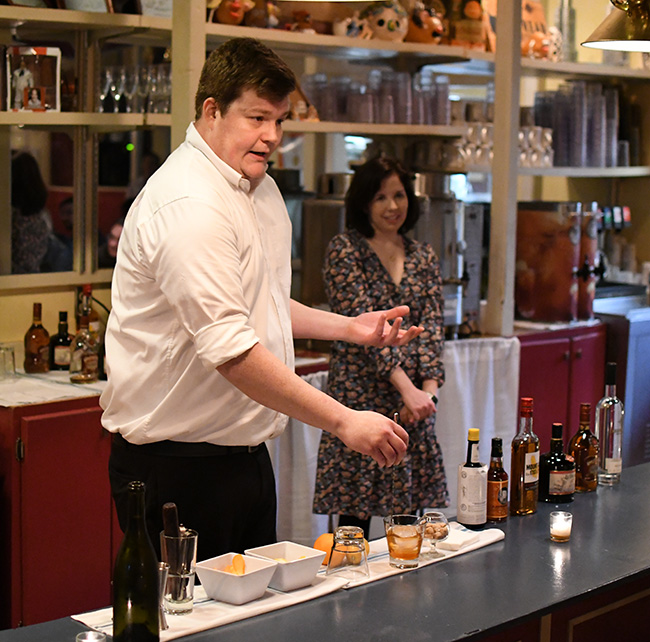 Ivy McLellan demonstrates the process of making a cocktail during the Southern Foodways Alliance's Cocktail Cookbook Party, part of Pop Up Oxford 2018, at Big Bad Breakfast in Oxford, Miss. on Monday, January 22, 2018. Pop Up Oxford 2018 is a weeklong celebration of Oxford's arts and cultural scene.

The party featured recipes from the “Southern Foodways Alliance Guide to Cocktails,” by Sara Camp Milam, and specifically highlighted rum as a historically Southern spirit. Milam says, although whiskey and bourbon are commonly considered the quintessential southern liquors, rum is the predecessor.

“When you think of the southern cocktail, most people think of brown liquor,” Milam said. “But in the colonial United States, rum was the foundational spirit. By the mid-1600s, rum was being made in large supply in the British Caribbean Islands.”

Guests, which included Oxford chefs and bartenders, were each given an old-fashioned after being seated. However, instead of the traditional bourbon, rum was at the forefront of the drink. Each cocktail was hand-crafted by Ivy McLellan, head bartender at Snackbar restaurant.

“We’re big bourbon fans already, so that’s kind of what drew us here,” Maggie Marshall, a guest at the event, said.

After giving a brief overview of the book, Milam and McLellan went on to give a conversational lecture about the history of rum and the unique ways Southern bartenders are incorporating it into their drinks. There was also a guided rum tasting throughout the lecture, featuring Charboneau white rum from Natchez, Appleton Estate signature blend from Jamaica, and what McLellan described as the “pinnacle,” a 12-year-old El Dorado dark rum from Guyana.

For McLellan, he says the key to making a perfect cocktail is keeping things simple and using authentic ingredients.

“Those three-ingredient classics, like a Manhattan or a daiquiri or negroni, once you master those, you’ll find you can make a lot of different cocktails,” McLellan said. “They’re classics for a reason. They stood the test of time, and they’re known for simplicity, balance and their availability.

The book, which features 88 recipes from 21 bartenders, is divided by spirit, as well as the classic cocktail each drink is derived from. In addition to the rum old-fashioned, McLellan and his team also whipped up other cocktails from the rum chapter, from frozen concoctions to more traditional offerings.

One of the things Milam and McLellan stress is that cocktails aren’t meant to be enjoyed exclusively in bars, but that it’s remarkably simple to craft them at home, improvising and adding new ingredients.

As with the other events during Pop Up Oxford, collaboration was an underlying theme of the event. Visit Oxford, host of Pop Up Oxford, helped SFA and Snackbar work together to create the event

“One of the reasons why we’re here, is we love these spirits. We want to impart that knowledge to you and grow that culture in the state,” McLellan said. “This window of time we’re in Oxford, we all want it to keep growing. We’re turning out a lot of really good food and drinks in this town, and we’re proud of what we’re able to accomplish.”

Brown Family Dairy: Made with love