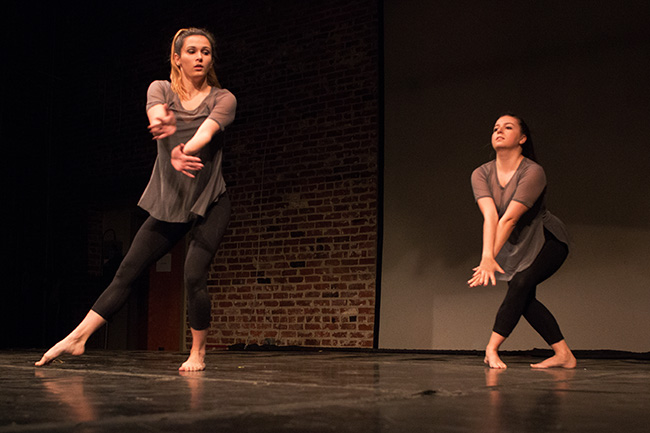 CHI KALU Chloe Martin and Parker Williamson of Hinge Dance Company perform during the Oxford Day for Art at the Powerhouse Community Arts Center in Oxford, Miss. on Tuesday, January 23, 2018.

The inaugural Day for Art party showcased a variety of visual and performing arts last night at the Powerhouse.

Hosted by Yoknapatawpha Arts Council in conjunction with Pop Up Oxford, the event was a response to defunding of several volunteer programs by the state, primarily Volunteer Mississippi. To make up for the loss of revenue, specifically the way it impacted arts programs in the Lafayette-Oxford-University community, the event raised funds through a $10 donation along with votes for area champions of the arts.

“Instead of doing a ‘Best Of Awards,’ what we’re doing is recognizing people who are making our community wonderful, who are contributing,” Wayne Andrews, YAC Director, said. “This is us saying we really think this person has done something in the last year to advance our community and promote the arts and we need to celebrate that.”

The even raised almost$9,000, which will be divided between all of the contenders. 890 people voted in the awards contest.

The event, which followed the first Art Crawl of 2018, featured booths from various arts groups, including Thacker Mountain Radio Hour, Oxford Film Festival, Oxford Civic Chorus, Plein Air Painters and more. Guests were able to walk around and learn more about each program before the awards ceremony.

The awards ceremony featured performances by Theatre Oxford, Hinge Dance Company and a trailer for the Oxford Film Festival.

“I think [being part of the event] places theatre on the same playing field as painting or photography or anything else,” said Kate Lechler of Theatre Oxford. “It’s saying that even though what we’re doing may seem silly, it’s an art, just like anything else.”

Theatre Oxford will hold a performance of “The Complete Works of William Shakespeare, Abridged,” at the Powerhouse on Feb. 22.

“This is motivating and inspiring, because we want to contribute to the arts both in Oxford and throughout the state, so to have this validation is huge,” Balach said.

“It’s a great vote of confidence for the students who work so hard on this program.”

Mary Margaret Andrews, who serves as vice president on Thacker Mountain Radio’s board of directors, says the fact that people in the area chose the organization means they’re doing something right.

“It’s a community award, so it’s the best award you could possibly get,” Andrews said. “We’ll use the donations to continue promoting Thacker’s mission, bringing music and literature to all.”

For a complete schedule of the rest of the week’s events, visit Pop Up Oxford’s web page, http://visitoxfordms.com/pop-up-oxford/.