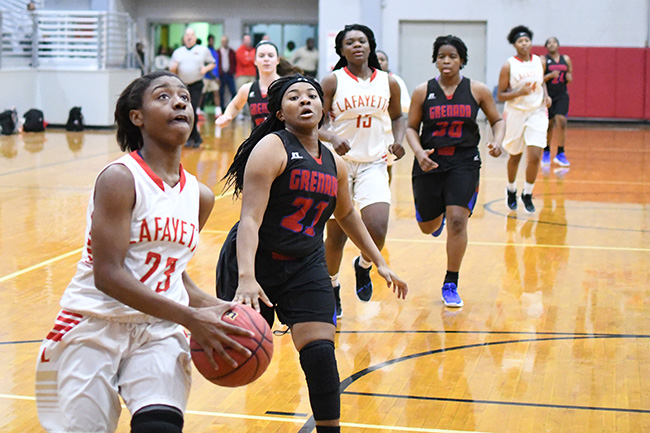 Shayne Linzy was not happy with his team’s offensive performance in the first half.

Lafayette scored 18 points in 16 minutes, yet led Grenada by 14.

It could have been more if close-range shots such as layups had been made. Linzy made sure the second half would be better, making his team stay on the court during halftime and running drills.

“Hey, it worked. We scored 21 points (in the second half),” Linzy said after the game.

It did work as the Lady Commodores defeated Grenada 39-12 inside the Lafayette High gym on Tuesday. Lafayette swept the Chargers in the regular season after a 52-24 win at Grenada on Jan. 9

It was the third straight win in four nights for Lafayette (14-6) who had to  squeeze in make-up games after the winter storm that hit the area last week.

The win also gives the Commodores a near stranglehold on the No. 1 seed of the Region 2-5A tournament later this month at Saltillo with a 4-0 record with two more region games to play.

Offense was at a premium for the Chargers (1-8, 1-2) with Lafayette’s defense stifling them for only three points in the first quarter and only one point in the second off a free throw.

“The great thing about (tonight) is defensively we might have played as well as we’ve ever played,” Linzy said. “Whatever shot (Grenada) had we either contested or blocked. …defensively, we didn’t make anything easy for them.”

Lafayette travels to West Point on Friday and a win there would more than likely seal up the No. 1 seed for the region tournament. Tuesday night’s win secured no worse than the No. 2 seed.

The Commodores were up one point on Grenada with about four minutes left to play when coach John Sherman decided to make a defensive switch. The plan did not work as Grenada hit their shot to take the lead and did not relinquish it for a 46-43 win.

Jonah Matlock had a look at a three-point attempt to send the game into overtime but it was deflected, falling short of the rim as time expired.

“We took a two-point lead and I went to a zone (defense). Why, I don’t really know,” Sherman said. “Just thought I’d throw something different at (Grenada). Bad decision on my part. …For some reason we gave up too many offensive rebounds under the basket.”