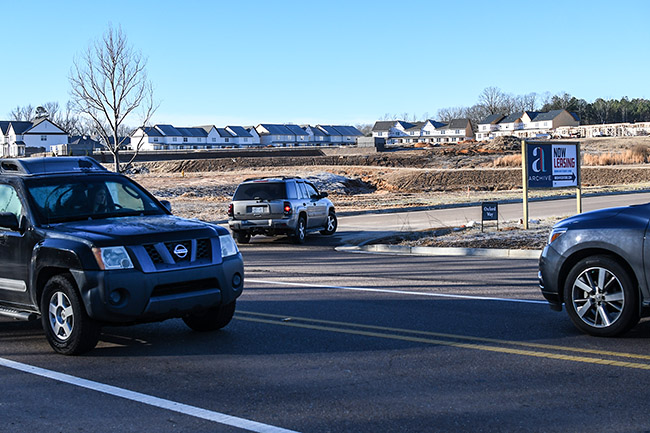 After spending about $4 million on expanding and improving Oxford Way, developer Andy Callicutt asked the Oxford Board of Aldermen on Monday to help pay for a traffic light at the intersection of South Lamar Boulevard and Oxford Way, which is estimated to cost about $150,000.

The board denied a similar request from Callicutt about two years ago; however, this time he has the board’s support.

Callicutt offered to pay to extend Oxford Way as part of an agreement with the city to annex the Oxford Farms development three years ago.

“(Alderman) Janice Antonow and myself supported the request two years ago to help pay for the light but it didn’t pass at that time,” said Mayor Robyn Tannehill Monday. “We’ve helped other developers recently with similar requests.”

Public Works Director Bart Robinson said he estimates the cost for the traffic signal to be around $150,000 to $200,000.

“But that’s just off the top of my head,” he said.

The board voted unanimously to approve paying for the traffic signal.

A future fire station could be built near Oxford High School in the next couple of years after the extension of Sisk Avenue is complete.

The land being considered by the city is owned by the Oxford School District and is located to the east of the high school. It would front the future Sisk Avenue extension that will connect Sisk Avenue to Highway 6.

To move forward, Robinson asked the board to approve Precision Engineering doing a land survey of the property.

The board approved the request.

Also on Monday, the board approved the final design for the downtown parking garage so that construction documents could be drawn up with hopes of advertising for bids by the middle of February.

The garage is expected to cost an estimated $11 million. The board approved a revenue plan last month that shows how the city will afford the bond payments for the garage. The plan includes charging 50 cents an hour to park in the garage, metering existing parking lots around the Square that are currently free to park, and leaving almost 200 free parking spaces in the city-owned lot under the water tower near the Oxford Park Commission office and about 90 parking spaces surrounding the garage that will be built in the lot off Jefferson Avenue behind the Oxford Square North shopping center.

Aldermen Janice Antonow and Preston Taylor said they felt there would not be enough free parking during the construction of the garage and believed the lots should not be metered until the garage is complete and open.

The board approved the design plans but tabled the discussion on whether to meter the open lots for a later date.

UPD chief of police resigns to be closer to…