Ole Miss travels to No. 10 Tennessee for ‘We Back Pat’ game 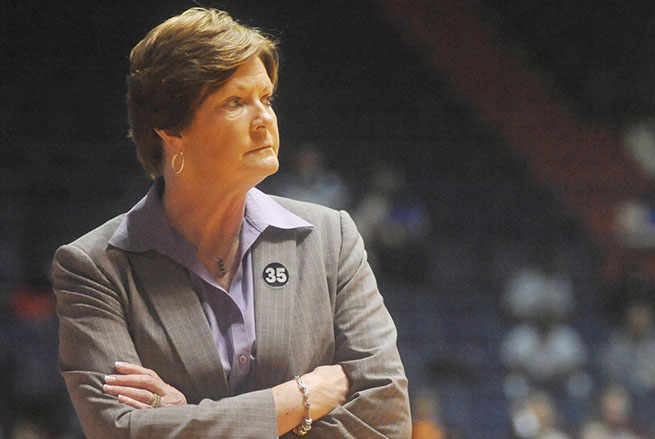 Ole Miss takes on No. 10 Tennessee tonight in a game that is considered a must-win for the Lady Rebels to get  their season back on track.

For Matt Insell, the game is about much more.

This week is ‘We Back Pat’ week in the Southeastern Conference in which the SEC honors one of the greatest women’s basketball coaches in history and brings awareness to the Pat Summit Foundation. Summit passed away in June 2016 after being diagnosed with early onset Alzheimer’s disease.

Being a part of this week is special for Insell, but playing Tennessee at Thompson-Boling Arena on the court known as ‘The Summit’ takes it to another level.

Insell and Summit had a relationship that dated back to long before he jumped into the SEC coaching ranks. It goes back to when Insell’s father, Rick, was coaching basketball at the high school level and Summit would come in hopes of finding a recruit or two.

“Pat was recruiting his players for many, many years. All the way back to the early ‘80s,” Insell said. “I’ve known Coach Summit as far back as I remember basketball. My mom and dad were close with Coach Summit and as I was growing up, going up there and being a Tennessee fan, being a part of a lot of her national championships as a spectator. It’s just been special. My mom and dad were real shaken, as the whole rest of our family, when she passed away.”

From then the two stayed in touch and became close friends. Summit’s career at Tennessee is one Insell — along with every other SEC coach — would love to have and hopes to one day emulate.

During her 38-year tenure at Tennessee, Summit had a record of 1,098-208 (.841 winning percentage), led her teams to eight national championships, 16 SEC regular-season and tournament titles as well as winning a silver medal in the 1976 Olympics as a player on the U.S. National Team.

“She made us all better,” Insell said. “When you get into it, you strive to do what she did. Not very often do you get to do that and Geno {Auriemma] has been very fortunate to do that and more. There’s going to be people who get into now that are still striving to do what Pat did, but there’s going to be people who strive to do what Geno does, and did. I think they’re icons of this sport. I think Pat Summit got it going.”

While there will be pomp and circumstance throughout the night, the Rebels (11-8, 1-5 SEC) still have a mission of leaving Knoxville with a win, ending a three-game losing streak.

The Lady Volunteers are coming off back-to-back losses at the hands of No. 5 Notre Dame and No. 2 Mississippi State. The Bulldogs defeated Tennessee 71-52 last Sunday.

“(Tennessee is) never down in talent where they may not have won as many games the talent level is always there,” Insell said. “We got our hands full. They got two of the best players in the league. … We’re excited about it. It’s a road test that we’ve got.”

After Tennessee, Ole Miss will come home for yet another top-10 matchup with in-state rival Mississippi State on Sunday.