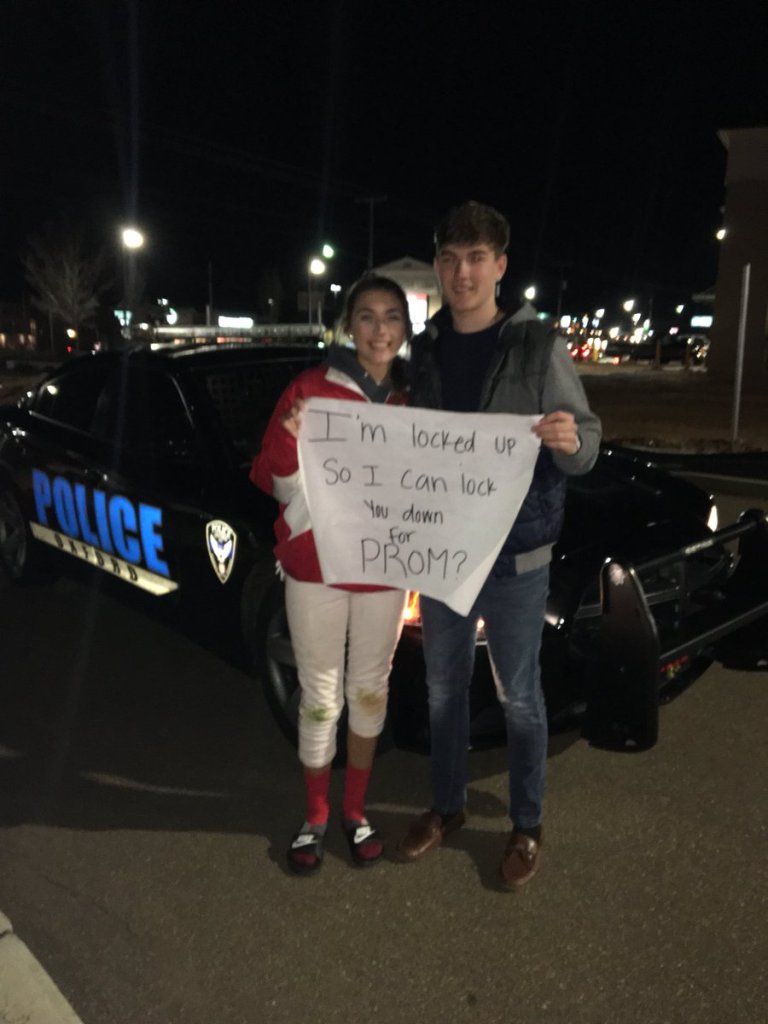 With Lafayette High School’s prom coming up in April, Logan Bay knew it was time to ask his girlfriend to be his date.

However, the 17-year-old LHS senior wanted to pop the question in a way his girlfriend, Cylie Robertson, would never forget.

Bay started looking on YouTube for ideas on creative ways to ask someone to prom. He saw a video involving a police officer who helped a young man ask a girl to the prom by pulling over the couple and handing the girl a “ticket” that asked if she’d go to the prom with the boy in the car.

Bay and Robertson, who is also a senior at LHS, are both interested in going into police work after graduation.

Bay enlisted the help of an LHS teacher who happens to be married to OPD Police Officer Brandon Jenkins.

After explaining his plan to the officer, Jenkins presented Bay’s request to OPD’s administration.

“We met with (Bay), got a game plan and then cleared it through Chief (Joey) East,” said OPD Maj. Jeff McCutchen. “We thought it was a cool idea and we were glad to be a part of it.”

Once everything was in place, Bay picked up Robertson Tuesday night and the two started driving along West Jackson Avenue.

“I pulled into the Double Quick gas station where we agreed to meet and the officer was there,” Bay said. “I pulled back out onto West Jackson and he followed but a car got between us and for a minute, I thought the whole plan was ruined.”

Bay pulled off West Jackson onto a side road, pretending to avoid the officer; however, Jenkins eventually pulled up behind Bay.

Jenkins approached Bay’s vehicle and after asking for his license and other paperwork, he told Bay to step out of the vehicle where he placed handcuffs on Bay and put him in the back of the patrol car.

Jenkins told Robertson her boyfriend was arrested for contempt of court for an unpaid speeding ticket and asked her if she wanted to talk to Bay before he was taken to the police department.

When Robertson walked over to the police car, Jenkins opened the door and Bay was holding up a sign that read, “I’m locked up so I can lock you down for prom??”

“Yes, even though I’m mad at you,” Robertson said, laughing.

The entire prom proposal was filmed by Bay and posted on social media Wednesday. It has already garnered about 1,000 views.

“It was a long process, and I was very stressed out,” Bay said Wednesday. “But it was worth it. She loved it and we laughed and talked about it the whole way home.”

Barksdale to step down from Oxford school board after…