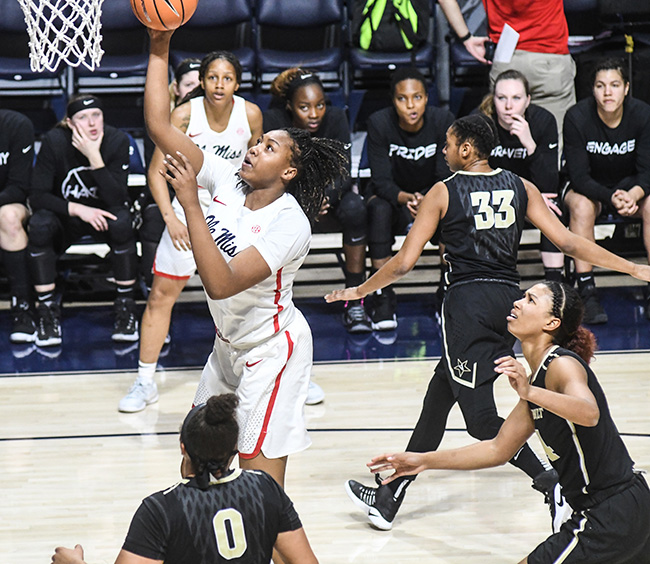 It got close towards the end, but Ole Miss’ struggles continued on Thursday night.

The Rebels lost 75-72 to Vanderbilt at The Pavilion for their sixth consecutive loss. It also puts Ole Miss in last place in the Southeastern Conference after a battle between the two teams with the worst league records heading into the game.

Alissa Alston led all scorers with 28 points and Torri Lewis finished with 12 points as the only players in double figures for Ole Miss (11-11, 1-8 SEC).

After trailing between 15-20 points all game, the Rebels went on a 15-1 run in the final two minutes of the game to make things interesting. Alston and Lewis combined for the Rebels’ final 12 points.

“(Vanderbilt) outplayed us. Particularly early in the game,” Ole Miss coach Matt Insell said. “We’ve got to play better. We’ve got to play with more energy. I’ve got to as a head coach figure out why we’re not not and I think I figured some things out today. I thought the last 16 minutes of that game we played as hard as we’ve played in a long time.”

It was the first game of the second half of Ole Miss’ conference schedule and was the easiest opponent they had remaining according to win-loss records. After going 1-7 in their first eight games, Thursday was considered a must-win in terms of turning their season around for a postseason berth.

Vanderbilt (6-17, 2-7) came into the game losers of their last three and also trying to turn their season around. The Commodores got off to a hot start, taking a 24-11 lead after the first 10 minutes. Ole Miss never really threatened the rest of the night until the mini-rally in the final minutes.

“Despite the adversity we’d been facing all year, we came out with high energy,” Vanderbilt coach Stephanie White said. “We did a really good job in setting the tone at the start. … We were able to make shots because our pace and our poise was good offensively.”

Christa Reed led the Commodores with 20 points, Cierra Walker and Kayla Overbeck each scored 13 and Chelsie Hall chipped in 11 points.

Vanderbilt outscored the Rebels 32-24 in the paint and scored 23 points off 18 Ole Miss turnovers. Thirteen of those turnovers occurred in the first half.

The Rebels’ post players, Shelby Gibson and Promise Taylor, were held to a combined 10 points by the Commodores’ defense.

“We ran the same offense in the second half we ran in the first half,” Insell said. “In the second half, we drove the lane and got in the paint and got into the gaps. The things we worked on for Vanderbilt for two days. We knew that zone was coming. Anybody who’s anybody is going to play us zone. Look at our numbers.”

Ole Miss hits the road for the next week beginning on Sunday when they travel to No. 17 Georgia followed by a trip to College Station and No. 14 Texas A&M next Thursday.