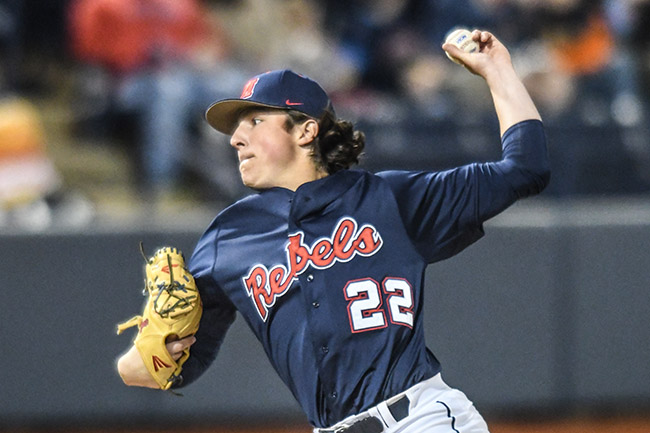 Rolison is expected to come off the board early in this summer’s Major League Baseball First-Year Player Draft should he decide to forgo his final two seasons of eligibility at Ole Miss and get an early start on his professional career. In fact, if the projections prove to be right, the Rebels’ sophomore left-hander could be the first Ole Miss player taken in the first round since Drew Pomeranz in 2010.

Rolison, a preseason All-America selection by Perfect Game (first team) and D1Baseball.com (second team), is ranked as the fourth-best pitching prospect and the No. 7 overall prospect for this year’s draft by Baseball America. MLB.com ranks Rolison the draft’s No. 9 overall prospect.

“I know it’s there,” said Rolison, who’s eligible for this year’s draft since he will turn 21 in July.

Not that high expectations are anything new for Rolison.

A top-100 prospect coming out of the University School of Jackson in Tennessee, Rolison was taken in the 37th round of the 2016 draft by the San Diego Padres but opted to honor his commitment to Ole Miss. Rolison began his freshman season in the bullpen but eventually moved into the weekend rotation, going 6-3 in 10 starts with a 3.06 earned run average.

With a slider, curveball and changeup to complement a fastball that can reach the low 90s, Rolison struck out 64 batters in 61 ⅔ innings and held opponents to a .242 average last season.

“After a couple starts, it was just getting kind of comfortable into that spot,” Rolison said. “Really just working all my pitches in there and trusting it. It’s still the same game as high school. Just trust your stuff and let the defense work behind you.”

With David Parkinson off to the professional ranks, Rolison will take over the Friday-night role as Ole Miss’ ace after a strong showing in the Cape Cod league during the summer. Rolison went 4-0 with a 1.92 ERA for the Orleans Firebirds, posting 35 strikeouts in six starts on his way to league all-star honors. He was ranked the Cape’s No. 3 overall prospect by Baseball America.

In addition to adding some bulk to his 6-foot-3, 205-pound frame, Rolison said he used the offseason to establish more consistency with his arm slot.

Rolison is taking a more aggressive approach toward his new role after issuing 24 walks last season, tied for most on the team. Attacking the strike zone from the jump in an attempt to eat up more innings has been a focus for all the starters, Rolison said. Junior right-handers James McArthur and Brady Feigl are once again in line to fill out the rotation.

“That’s one thing that Coach (Mike) B(ianco) and the staff is preaching,” Rolison said. “We need three starters that will get us deep into the game and save the bullpen. That’s one thing I was honing in on this summer and in the intrasquads, attacking the hitters right away and trying to keep my pitch count down to try to get as deep in the game as I can.”

As is usually the case when Rolison takes the mound, there will be plenty of eyes watching once Ole Miss starts its season with a three-game series against Winthrop on Feb. 16 at Swayze Field.

“It’s hard to ignore, but at the same time, I come to the field every day, put my head down and try to be the best teammate and pitcher I can be every single day,” Rolison said. “If I do that, the rest will take care of itself.”

TOGETHER AGAIN: Maddy Houghton reunites with sister Alley at…