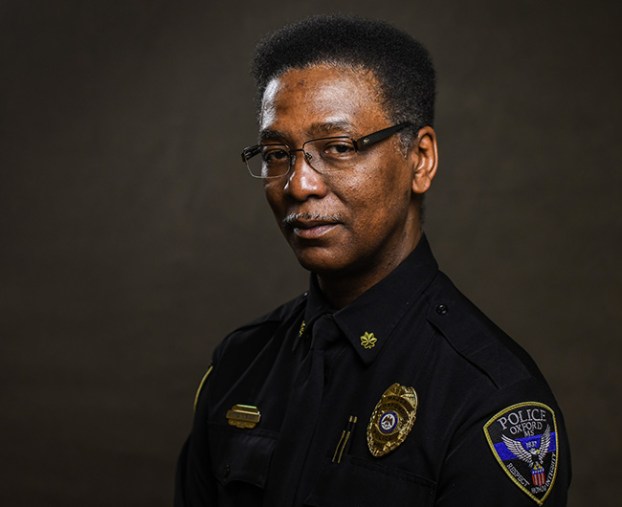 During Black History Month, the EAGLE will profile local African-American community leaders. This week, the EAGLE sat down with Oxford Police Maj. Sheridan Maiden to talk about his 30 years in law enforcement.

Growing up in the Mississippi Delta in the late 60s, becoming a police officer was something that never crossed Sheridan Maiden’s mind.

“There weren’t many policemen who looked like me at the time,” Maiden said.

However, Maiden, now 59 and with almost 35 years of law enforcement experience, says he couldn’t imagine his life any other way.

The son of the late Howard and Alma Maiden, learned the value of hard work at a young age while picking cotton in Clarksdale as a young man.

“When I got the opportunity to go to college, I took it,” he said.

He attended the University of Mississippi where he earned a bachelor’s degree in what was then called public administration but today, is a degree in criminal justice. He said it was the relationships he made while at Ole Miss that steered him into a law enforcement career.

“Those gentlemen had a big impact on my life,” he said.

Maiden worked at the University of Police Department while attending school. Over the next quarter of a century, he would work at City of Starkville Police Department before being transferred to the Mississippi Police Academy. He moved on to Jackson State University where he would eventually serve as assistant chief.

“I’ve trained well over 1,000 officers while at the academy,” Maiden said. “I’ve seen a  lot of guys move up and become chiefs – both black and white – and it makes me feel good knowing I helped these guys be able to move up in their career.”

“My oldest was in college already and the younger one was about to start college, so we decided to move back to Oxford,” he said.

However, Maiden received a phone call from the governor’s office and was asked to take a job with the State Capitol Police Department under Gov. Ronnie Musgrove. There he served as chief and director of law enforcement of the Department of Finance.

Nine years ago, he was hired at the Oxford Police Department by then-Chief Mike Martin as a patrolman and accreditation manager. He was promoted to sergeant and eventually, to Major working directly under Oxford Police Chief Joey East.

When not being a police officer, Maiden spends time with his five grandchildren and working with other children from Lafayette County through the Oxford Park Commission where he volunteers regularly, whether helping at the Oxford Activity Center, working at FNC Park or coaching.

“I’ve been blessed to be associated with OPD and OPC and the city of Oxford,” he said. “People here are very kind and I now consider this home.”

Maiden says he has no immediate plans to retire.

“I feel good, my health is good,” he said. “As long as the chief is satisfied with my work, I want to hang in there.”

OSD students will return to school on Aug. 8.

After much back-and-forth discussion, motions made, motions failing and motions being rescinded, the Oxford School District Board of Trustees approved... read more