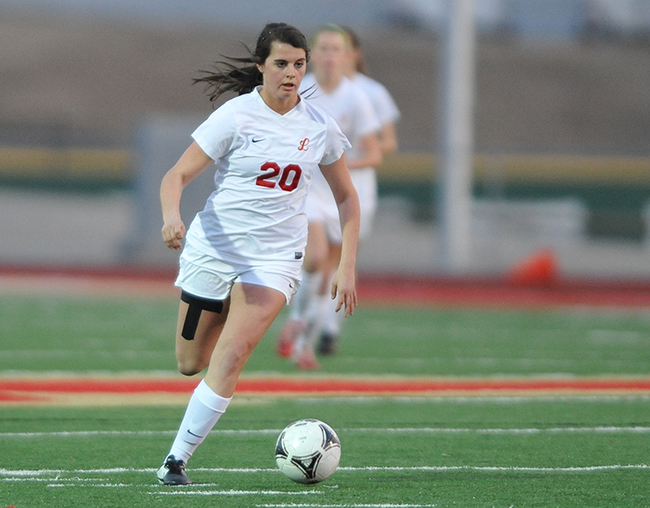 The Ole Miss signee has fully recovered from a fractured tibia suffered during her playing days at Lafayette and reunited with sister Alley Houghton to play for the Rebels.

Houghton appeared in back-to-back Class 4A state championships — winning one as a freshman in 2015 — during her time with Lafayette before transitioning to play club ball.

Houghton’s decision to walk away from high school soccer was purely her looking ahead at the next step of her career.

“It was just to better myself and my sister was leaving, so I didn’t want to do alone anymore,” Houghton said. “I actually knew I wanted to play club ball more and I tried to do teams where I would just guest play with them but I realized for me to be a better player I need to be able to practice with the team I’m playing with. …that’s when I was like, ‘I need to find a club team.’”

The leg injury occurred while playing a game with the Lady Commodores, and it forced Houghton to spend some time away from the sport she loves. After a few months off her leg, Houghton was back at it, playing in multiple club teams including FC United 98 out of Tupelo where she led the team to state championships in 2012-13 and 2015. Houghton also played for Birmingham United Soccer Association ECNL and the 00 Lady Lobos out of Collierville, Tenn in 2016-17, winning a state championship with the Lobos last year.

Houghton had verbally committed to Ole Miss between her freshman and sophomore seasons at Lafayette. When Houghton made the move to full-time club soccer it brought along some interest from other schools including Mississippi State, Georgia and even Jackson State upon hearing she had already committed to the Rebels.

“Maddy had great killer instinct and was not afraid of anything,” Ole Miss soccer head coach Matt Mott said of seeing Houghton for the first time. “Even though she was younger than everybody else she would mix it up with them. We really liked her and thought she’s got a chance to be really good. …She was always at our games the last couple seasons watching Alley. She’s a Rebel. No doubt about it. (Her) family is Rebels. She’s one of us and has been for a long time and now it’s official.”

When Maddy and Alley played together they were a force to be reckoned with on the pitch for Lafayette. If Alley was not finding ways to score on her own she was relying on Maddy to help set up what would be an eventual goal.

The two combined for 296 goals as Commodores and over 80 assists.

Alley graduated and joined Ole Miss in 2016, leaving Maddy on the field without her sister, someone she had shared a soccer field with for most of her life.

And it just wasn’t the same anymore.

“I’ve been waiting for the moment for a long time,” Maddy said. “After her having to leave me and I was by myself. We always had this chemistry on the field. She’s my sister, I’ve been playing with her for a while so we had chemistry. I could always find her if I needed to and now that we’re finally back together we can continue to do some amazing things.”

For Maddy, it has been helpful having someone so close to the Ole Miss program and with experience playing at the next level. Alley helped her get into shape and pass Mott’s physical text which he noted was ‘hard to do as a high school senior, Maddy said.

Spring practice began last week and the results are mirroring what the Houghton sisters accomplished across town at William L. Buford Stadium a few years ago.

“There’s definitely a connection there,” Mott said. “You can tell it’s a comfort level. Certainly a comfort level for Maddy. I think it’s good because she is here and she’s young and to have somebody here and been through it and knows what to do.”

Before her freshman season begins in August, Maddy will be able to play in five collegiate games this Spring, getting her prepared for her first taste of Southeastern Conference soccer this Fall.