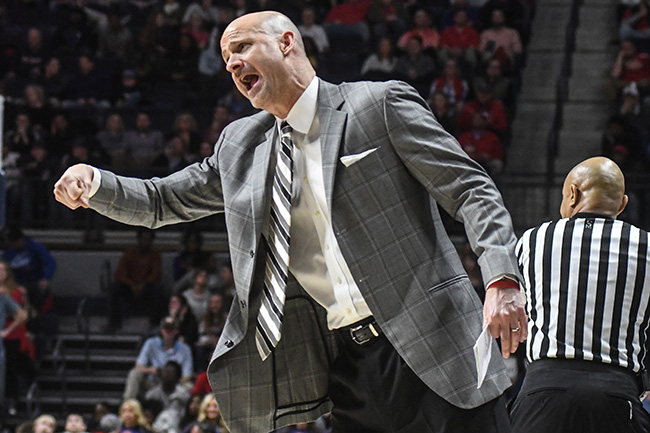 Following Ole Miss’ 33-point loss at No. 18 Tennessee on Saturday — his team’s worst margin of defeat this season — head coach Andy Kennedy gave plenty of credit to the raucous home-court advantage at Thompson-Boling Arena for the part it played in the Volunteers’ lopsided win.

While also heaping praise on the job Tennessee third-year coach Rick Barnes has done in resurrecting Tennessee’s program and the knowledge of the Volunteers’ fan base, Kennedy threw in a line that raised some eyebrows.

“I appreciate the passion of the fans,” Kennedy said during his postgame press conference. “I appreciate them supporting the Big Orange. I’ve known Rick for a long time, and I think you guys have a good basketball intellect here, unlike some places. You’ve got a Hall of Fame coach.”

Speculation began as to what other places Kennedy was referring to, including Ole Miss supporters wondering if it was a dig at his own fan base. Kennedy clarified his comments Monday during the SEC men’s basketball teleconference, saying it was nothing more than a compliment for the 18,316 fans that filed into Thompson-Boling Arena to watch Tennessee win for the eighth time in its last nine games.

“My comment was basically a compliment toward them and nothing further. I don’t want anybody reading in,” said Kennedy, who didn’t have his contract extended in the offseason. “It was not singling out anybody, most especially not our fans, who have been tremendous — most especially since we have provided them with The Pavilion. The energy has been great. Our students have been as good as they’ve been in my 12 years here, and hopefully that’s the case again tomorrow night as we’re going to need a home-court advantage going up against a really good Missouri team.”

Meanwhile, Ole Miss’ season is headed in the opposite direction. The Rebels (11-12, 4-6 SEC) have lost five of their last six games heading into Tuesday’s home tilt with Missouri (8 p.m., SEC Network) and are looking at having to win the SEC Tournament in St. Louis next month if they want to avoid missing the NCAA Tournament for the 10th time in Kennedy’s 12 seasons at the helm.

The Rebels are drawing 6,933 fans on average this season at The Pavilion, which has a capacity of 9,500. Ole Miss is 10-4 overall at home and 4-1 in SEC games in its own building with the lone loss coming to SEC leader Auburn.

Ole Miss has never had a losing season during Kennedy’s tenure but dropped below .500 for the first time this season with the loss to Tennessee. The Rebels are also tied for the second-worst league record with a schedule that won’t get much easier down the stretch.

Missouri (15-8, 5-5), fresh off a 69-60 upset of No. 24 Kentucky on Saturday, is one of eight SEC teams predicted to make the NCAA Tournament in the latest bracket projections released by ESPN’s Joe Lunardi. Tuesday will be the first of two meetings between the teams while Ole Miss also has trips to LSU (75 RPI), Mississippi State (57) and Kentucky (16) as well as home games with Arkansas (41), Tennessee (13) and Vanderbilt (120) left on the slate.

Ole Miss head coach Andy Kennedy knew his team got their tails kicked Saturday against Tennessee. He still had nothing but the best to say about Rick Barnes, their team, and #VolNation pic.twitter.com/yoRznjGru9