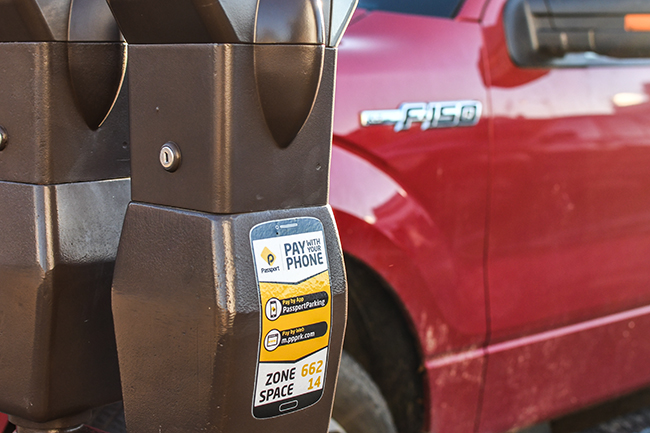 People parking on the Square have been able to use the Passport Parking app, in Oxford, Miss. on Monday, February 5, 2018. Parking Director Matt Davis said he has sent information to the Oxford Square Alliance on another program through Passport, called Paperless Merchant Validation.

With less free parking on the Square available as the new parking garage is constructed, downtown businesses will soon have an option to help customers or even employees pay for parking.

The city of Oxford has been using the Passport Parking app for more than three years. The app allows visitors to the Square to pay for parking using their cell phone, rather than digging for change. It also allows them to add money to the meter if their parking time is running out without having to go back out to their car.

On Friday, Parking Director Matt Davis said he has sent information to the Oxford Square Alliance on another program through Passport, called Paperless Merchant Validation.

“Each merchant can create an account and load a certain amount of money,” he said. “If customers or employees pay for parking, the business can choose to validate, or pay, for some or all of the time.”

Businesses can use the program for marketing purposes. For example, if a customer spends a certain amount of money at the store, the store will pay for parking for the amount of time someone was shopping in the store. Restaurants could offer specials on their menus that will give a discount off their parking, et cetera.

“It’s up to the merchant,” Davis said. “It’s no cost to the city but it’s an option for businesses if they want to use it.”

According to data presented by Davis on Friday at DPAC’s regular meeting, about 4 percent of people paying to park are using the free Passport app; however, there’s been an increase over the last few months. In September, 3 percent used Passport to pay for parking while 5 percent used it in January. Most parkers, 51 percent, in January paid with a debit or credit card.

To use the app, visit the app store on your phone and type in Passport Parking. You create a username, password, set up the financial information and whenever the user utilizes it, there is a 35 cent-flat rate per transaction along with the cost of the meter.

Also on Friday the commission discussed reviewing the ticket structure for overtime parking tickets. Currently, the first two tickets are $10. A third ticket in the same year is $25. Each ticket afterward is $50. After a year passes from the date of the first ticket issued, the amounts revert to the $10, $10, $25, $50 structure.

Davis said the city has been struggling with collecting payment for tickets and suggested that all tickets, no matter how many some receive, be $10; however, a $10 fee for each month the ticket remains unpaid is added.

Some of the commissioners thought the city should “reward” those who pay quickly and suggested the tickets become $15; however, if paid within the first 15 days after the ticket is issued, it’s only $10.

The commission took no action on the ticket rates and tabled it for a future meeting.

Davis also told the commission that in January, the city took in $59,732 in parking meter revenue. Parking officers wrote 1,215 tickets. Davis reported a part-time officer has been hired to work on Saturdays. The department now has two, full-time officers and one part-time officer.

OSD students will return to school on Aug. 8.