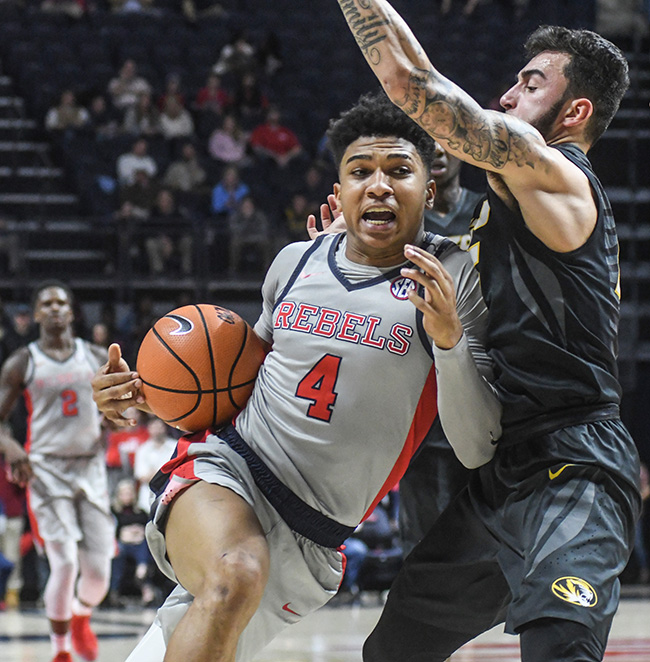 Andy Kennedy figured the Southeastern Conference would be as strong as it’s turned out to be this season. Kennedy also figured he had a team with enough talent and experience to combat it.

Instead, Ole Miss’ 12th-year coach is struggling to comprehend the way his team keep losing games. And there may not be an end in sight if things don’t change.

Ole Miss’ slide continued with a 75-69 loss to Missouri on Tuesday at The Pavilion. The setback, which dropped the Rebels to a season-worst two games under .500, is Ole Miss’ fourth straight loss and sixth in their last seven games.

“I guarantee you anybody that’s out there wringing their hands, there’s nobody that’s put more blood, sweat and tears in this than I have,” said Kennedy, who’s never had a losing season during his tenure. “I am completely culpable as it relates to the product on the floor. The product is not good enough, and that’s my responsibility.”

Ole Miss had its chances against Missouri, one of eight SEC teams projected to be in the NCAA Tournament in the latest bracket projections released by ESPN’s Joe Lunardi. The Rebels tied it at 67 on Dominik Olejniczak’s layup with 1:45 remaining before Kevin Puryear put the Tigers ahead again with two free throws.

Terence Davis missed a rushed 3 on Ole Miss’ next possession, starting a string of four straight misses for Ole Miss from the field. By the time Breein Tyree’s dunk ended the Rebels’ mini-drought with 20 seconds left, Missouri had a two-possession lead, making six of its final eight free throws to salt away its third straight win.

“This was a team (in Ole Miss) that was hungry and fighting,” Missouri coach Cuonzo Martin said. “Tough place to play and really good atmosphere. We did the right things down the stretch.”

Kassius Robertson led Missouri with a game-high 27 points, shooting 8 of 16 from the field and 5 of 9 from 3-point range to account for half of the Tigers’ 10 3-pointers. Freshman forward Jontay Porter recorded a double-double with 18 points and 13 rebounds while Puryear finished with 12 points and six boards for the Tigers, who shot 45 percent from the field and finished plus-5 on the glass to overcome 11 turnovers.

Kennedy also lamented the fact that Missouri doubled up Ole Miss in 50-50 balls charted by the coaching staff, something he and his players agreed has happened far too often in close games this season. It played a part in the Rebels losing their fourth game at home by two possessions or less.

Davis paced Ole Miss with 20 points on 7 of 14 shooting but had just six in the second half as the Rebels made a more concerted effort to work the ball inside to Bruce Stevens, who finished with 11 of his 15 points and went 5-for-5 from the free-throw line after halftime.

Markel Crawford finished 5 of 11 from the field on his way to 11 points, but there was far too much inconsistency from some of the Rebels’ other regulars. Deandre Burnett went just 2 of 9 from the field for a season-low five points and combined with Marcanvis Hymon (1 of 3), Tyree (3 of 9) and Olejniczak (2 of 6) for just 20 points as Ole Miss shot 40 percent from the field and just 29 percent (5 of 17) from beyond the arc.

“We’ve just got to be more efficient out of that backcourt,” Kennedy said. “Three of the five (guards) have to play a B-plus game or we won’t win another game. I know that. We have to play and make the plays that the SEC game allows in order to win these games.”

Things started well for the Rebels, who began the game on a 11-0 run, but Missouri doubled up Ole Miss 40-20 for the rest of the first half on the strength of the deep ball. The Tigers made seven of their first 14 3s on the way to a 40-31 halftime lead.

Ole Miss drew even at 46 on Tyree’s 3 with 12:35 remaining and went back and forth with the Tigers the rest of the way, but as has been the case for most of the season, it was the Rebels’ opponent that made the necessary plays down the stretch.

Ole Miss’ next chance to end its losing streak will come Saturday with a 3 p.m. tip at LSU before the Rebels return home next Tuesday to take on Arkansas. Those are two of six top-75 RPI opponents Ole Miss will face in its final seven regular-season games.

It’s up to the Rebels to keep things from spiraling out of control.