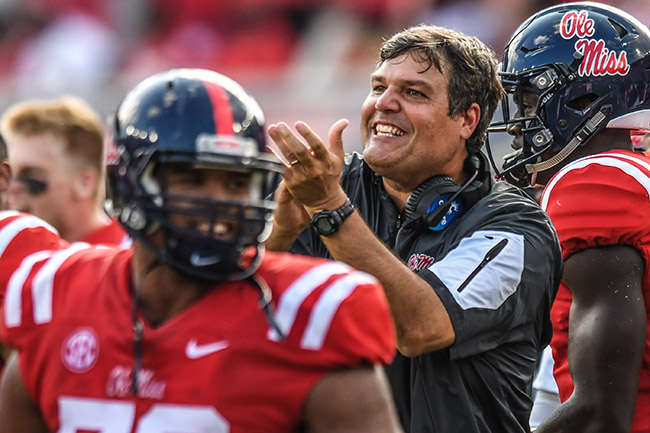 Most of the work in Ole Miss’ 2018 recruiting class is done.

But the Rebels will use the traditional signing period to finalize their latest crop of signees. Ole Miss signed 15 players during the early signing period in December and have six recruits verbally committed that are set to make it official after landing a verbal pledge from Brentwood Academy (Tennessee) three-star linebacker Luke Knox on Tuesday.

That puts Ole Miss’ class at 21 prospects entering Wednesday’s traditional signing day with 20 of them counting toward the current class. Running back Isaiah Woullard inked during the early signing period after grayshirting last season and will count back to the 2017 class.

With NCAA penalties reducing the number of scholarships in the 2018 class by four, the Rebels only have a handful of spots remaining. Here’s a look at some of the top uncommitted prospects Ole Miss will be targeting Wednesday to round out its class, which sits at No. 28 nationally in the 247Sports composite team rankings.

It’s turning into an Ole Miss-Mississippi State battle for Lovett, the state’s highest-ranked uncommitted prospect in the 247Sports composite rankings.

A three-star prospect ranked as the nation’s No. 18 strongside end in the 247Sports composite, the 6-foot-3, 285-pound Lovett was once committed to the Bulldogs but opened his recruitment back up on New Year’s Day. Lovett, who had 81 tackles, 25 tackles for loss and 6.5 sacks his senior season at Olive Branch, has the size to slide inside if needed and would add to an already deep defensive line class for Ole Miss, which already has six linemen signed or committed.

Florida is also in the mix here with former MSU coach Dan Mullen at the helm. Lovett has visited all three schools within the last month.

Arguably the most productive two-way player in the Mississippi high school ranks a season ago, Knight’s recruitment has been a hot topic of conversation in his home state during the recruiting calendar’s home stretch.

Knight made 117 tackles for the MHSAA Class 6A champion Pirates last season while scoring 13 offensive touchdowns from all over the field (seven rushing, four receiving, two passing) but had just one FBS offer as recently as early January in part because of his small stature (5-7, 170 pounds). He’s committed to Louisiana but received a scholarship offer from Ole Miss late last week, which could shake up things up in his recruitment.

The ability to hold up against the size and strength of bigger players in the SEC will always be questioned should Knight make the flip and sign with the Rebels, but Knight would instantly become one of the more versatile players on Ole Miss’ roster. Defensive back, linebacker, running back, receiver and quarterback are just some of the positions Knight played for Pearl last season.

Ole Miss coach Matt Luke said after the early signing period that he wanted to sign one or two offensive linemen, and Jenkins is at the top of the list.

Jenkins, a consensus four-star prospect ranked as the nation’s No. 11 guard in the 247Sports composite, is also being heavily courted by Oklahoma, Texas A&M and others. Ole Miss only has one other offensive lineman signed or committed in Chamblee Charter (Atlanta) product Hamilton Hall, who also projects as an interior lineman at the next level.

It’s an important position for Ole Miss, which will lose starting guards Javon Patterson and Jordan Sims after next season. The 6-3, 325-pound Jenkins could provide quality depth there early in his career with the possibility of being a future long-term answer, but the Rebels have to sign him first.

Ole Miss was the last school to get its chance to impress Jenkins, who officially visited campus over the weekend.

A bigger back at 6-1 and 218 pounds, Strong ran for 1,388 yards and 15 touchdowns in his final season at Union County. Strong is ranked as a three-star prospect and the nation’s No. 27 running back in the 247Sports composite.

Strong also plays a position of need for Ole Miss with Jordan Wilkins and Eugene Brazley out of eligibility. D’Vaughn Pennamon, Eric Swinney and little-used DK Buford are the only scholarship backs left from last season, and there are durability concerns with Pennamon (dislocated knee late last season) and Swinney (stress fracture and ACL surgery the previous two seasons).

Ole Miss landed a back during the early signing period in Jones County Junior College product Scottie Phillips, but the Rebels would like another in Strong.

After landing a commitment from Houston receiver Miles Battle earlier this week, Ole Miss will try to pull off the Texas two-step with Bush, a four-star prospect ranked as the nation’s No. 196 overall prospect in the 247Sports composite.

Battle is one of three four-star receivers already signed or committed to Ole Miss with the Rebels returning A.J. Brown, DK Metcalf and DaMarkus Lodge from last year’s team, so Ole Miss isn’t hurting for talent out wide, but Bush would bring a different kind of playmaking ability with his 6-5, 191-pound frame. Metcalf, at 6-4, was the only receiver in the rotation a season ago taller than 6-2.

Bush took his official visit to Ole Miss in January and visited Baylor last weekend. Texas and Georgia are among the other schools in the mix to land Bush’s signature.