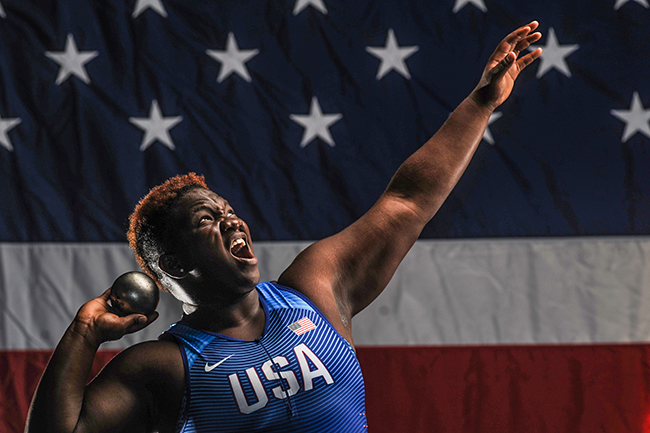 Ole Miss and Olympic shot putter Raven Saunders, in Oxford, Miss. on July 22, 2016, is concluding her Ole Miss career and stepping away from the track for a time as she returns to full health.

One of the most decorated track & field athletes at Ole Miss in recent years is hanging up the shot put. For now.

Raven Saunders is concluding her collegiate career at Ole Miss and is walking away from the sport for a period of time to focus on her health.

“I am eternally grateful for the opportunities and understanding that my teammates, the coaching staff and the administration have expressed to me,” Saunders said in the statement released by the school. “With a heavy heart, it saddens me to say that I have decided to leave Ole Miss and take some time to focus on myself.”

Saunders walks away as the top shot putter in the history of the NCAA both indoors and outdoors. During her time at the collegiate level she won four NCAA titles, two at Ole Miss (outdoors in 2016, indoors 2017) and two more her freshman season at Southern Illinois before transferring to Ole Miss.

“Over time, I have been dealing with some personal and medical issues that have led me to come to this decision,” Saunders continued in the statement. “However, I intend on returning to complete my degree from the University of Mississippi. Thank you to Rebel Nation and my Ole Miss family for your love and support over the past few years. Hotty Toddy!”

Saunders holds both collegiate records at 19.56 meters (64-02.25 feet) indoors and 19.33 meters (63-05.00) outdoors. She also represented Team USA in the 2016 Summer Olympic Games in Rio, where she advanced to the final as the youngest in the field and finished fifth overall.