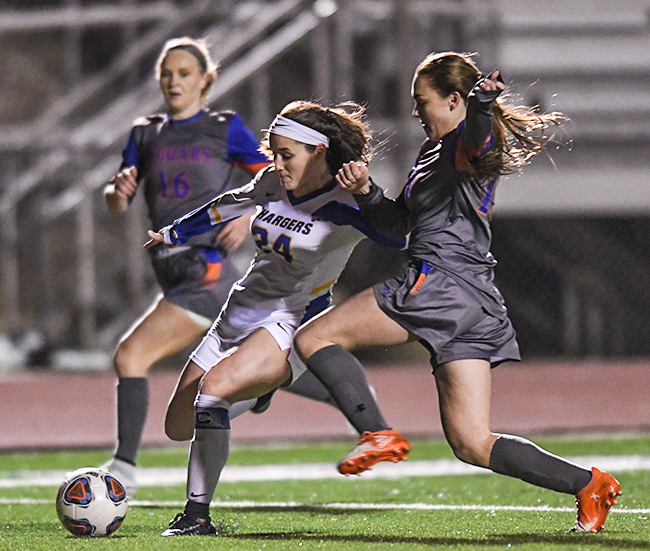 There will not be a three-peat.

For the first time in over three years Oxford tasted defeat in the postseason, losing to Madison Central 3-2 in overtime of their MHSAA Class 6A first round playoff match on Monday at Bobby Holcomb Field.

It is the first loss in the postseason for the Chargers since Jan. 27, 2015 when Oxford fell to Germantown 1-0 in sudden death of the first round of Class 5A playoffs.

Jaguars’ Sara Martin Meyers got a shot past Oxford goal keeper Anna Kate Trost in the second five-minute sudden death period to advance to the second round. Madison Central will play Clinton on Saturday while the Chargers are left examining their first season in 6A that is now over.

“We felt like we had them,” Oxford coach Hunter Crane said. “Sometimes the ball doesn’t bounce your way. I thought we had them for 80 minutes, unfortunately we gave up a penalty kick with four minutes left to go in the game then that gave (Madison Central) a ton of momentum going into the overtime periods and they kind of blitzed us there.”

After a feeling out process in the first 20 minutes of the opening half, Oxford (15-7-1) got on the board first with a goal by Ally Shinall in the 21st minute. After being shutout 3-0 in a loss to Madison Central on Dec. 1 in Laurel, the Chargers were the aggressors in the rematch on Monday.

Martin accounted for all three of the Jaguars’ goals, scoring her first in the 54th minute to knot the game at 1-all. Madison Central (14-3-1) once again tied the game at 2-2 after Martin scored off a penalty off a questionable call during a Madison Central corner kick in the 75th minute.

Senior Grace Ann Joyce had given Oxford a 2-1 advantage off a penalty kick of their own in the 59th minute.

The back-and-forth continued through regulation and both 10-minute overtime periods, setting the stage for the mandatory two five-minute sudden death periods. It remained 2-2 after the first five minutes but Martin got her shot past Trost early into the second five minutes to clinch the victory.

“(Trost) played a great game,” Crane said. “A lot of huge saves. A lot of great things for us. Did everything that we asked her to do. Just unlucky. I don’t know what happened exactly, but just unlucky.”

Oxford’s main weapon was not a full strength with Morgan O’Connor battling through a leg injury all night. Late in the overtime periods she suffered a calf strain, hampering her even more. She was also constantly marked by Madison Central’s Maddie Lafluer every second of the match.

“They were doing a lot of things to try and take (O’Connor) away,” Crane said. “It’s what they did to us (in Laurel). We kind of expected it. They put their best on our best and (Lefleur) won some and Mo won some. She’s a quality player, very fast and stayed with Mo every step.”