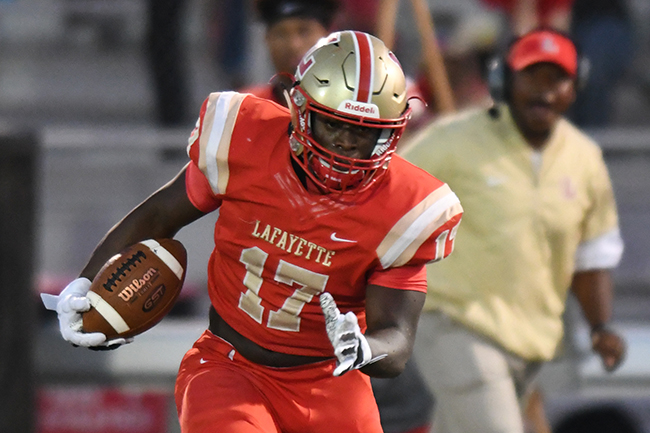 The second round of National Signing Day for the class of 2018 arrived on Wednesday and two Commodores decided where they will be playing this fall.

The duo signed their letters of intent at Lafayette High School Wednesday morning.

After a breakout season his junior year — earning him the 2016 EAGLE Player of the Year and Lafayette a state championship — Quarles had a successful season in 2017. The running back rushed for more than 1,100 yards and more than 10 touchdowns during his senior campaign.

“They have the drive to win championships,” Quarles said of EMCC. “When I saw the little projector with the video on it (during a recruiting presentation), it motivated me to choose East Mississippi.”

Coach Buddy Stephens has turned EMCC into a national powerhouse with the talent he puts on the field, and the Netflix documentary “Last Chance U” helped make them a household name — something Quarles took into account.

“I’m just going to do whatever Coach Buddy wants me to do,” Quarles said. “At the moment, if he thinks that I’m up for the starting role, then I’ll do that.”

For Onsby, it came down to a pair of junior colleges that reside on Interstate 55. Holmes Community College was on his radar after a visit last Thursday, but an in-home visit with former Oxford assistant and current Northwest Mississippi assistant Stan Hill on Saturday sealed the deal.

“When Coach Hill stopped by, it felt like family,” Onsby said. “I just knew that’s where I wanted to go.”

Hill wants to use Onsby as a fullback in Senatobia, which was something the two agreed on. During his time at Lafayette, Onsby was primarily on the offensive line but was also used as a halfback at times, making the transition to fullback not too foreign.

“They were instrumental in getting us where we wanted to go two years ago,” Lafayette coach Michael Fair said. “Of course, our record didn’t turn out like we had all hoped this past year, but I can’t imagine what it would have been without these two. Two great guys. Leaders in our football program.”