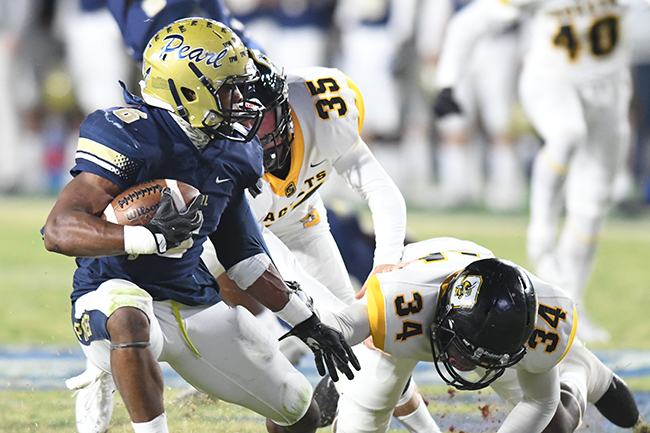 National Signing Day was a relatively quiet one for Ole Miss this year.

The Rebels wrapped up their 2018 recruiting class Wednesday with just one new addition. Ole Miss signed all six of its commitments that waited until the traditional signing period to ink their National Letters of Intent, officially adding to the 14 players that signed with the Rebels during December’s early period.

Ole Miss missed on most of the uncommitted prospects it was in the mix for Wednesday but landed a signature from Pearl athlete Tylan Knight, who flipped from Louisiana after receiving an offer from the Rebels late last week.

“Any time that you start where we started and end up around the top 25 in the recruiting rankings, that’s just a credit to the (coaching) staff and the job they were able to do,” Luke said.

Cypress Creek (Texas) four-star receiver Miles Battles followed through on his commitment and inked with the Rebels on Wednesday, joining early signees Demarcus Gregory and Elijah Moore to give Ole Miss a trio of four-star wideouts in the class.

Ole Miss’ highest-ranked signee, U.S. Army All-American quarterback Matt Corral, will enroll early and add immediate depth and competition at the position. Corral will be one of just three full-time scholarship quarterbacks on the roster this spring following Shea Patterson’s decision to transfer to Michigan.

“That was a big need for us,” Luke said.

One position that still needs to be addressed is the offensive line with Chamblee Charter (Georgia) three-star guard Hamilton Hall being the only lineman to sign with the Rebels. With Rod Taylor out of eligibility and Greg Little possibly bolting early for the NFL after next season, Luke said tackle will be a focus of a large offensive line class in 2019.

“I think we’ll probably end up signing five next year,” Luke said. “Potentially four depending on how it goes, but four or five for sure next year.”

As for Knight, Luke called the 5-foot-7, 170-pounder “probably the steal of the class” with his production and versatility. Knight was a two-way standout for Pearl last season, finishing with 117 tackles and accounting for 14 touchdowns (13 offensive, one defensive). He earned co-MVP honors at the annual Mississippi-Alabama All-Star Game after recording five tackles, three tackles for loss and an interception.

Luke said he’s already had discussions with his coaching staff about lining Knight up at corner, running back, receiver and in the return game.

“We had a lot of discussions in our staff meeting similar to what we did when we had Dexter McCluster,” Luke said. “This kid I think is a dynamic player, and I’m really excited about him.

“We got him on the bus. Now we’ve just got to find the right seat.”

Luke said he’s hoping to bring in “a couple” of graduate transfers at positions of need to help immediately.

One of those is former Cal offensive lineman Dwayne Wallace, who announced his commitment to Ole Miss with a post to his Twitter account Wednesday. Wallace, who has one season of eligibility remaining, was not included among Ole Miss’ list of signees Wednesday.

The 6-4, 350-pound Wallace played in 12 games with nine starts at right guard for Cal in 2016 but was not associated with the Bears’ football program last season.

Ole Miss was in the mix for Park Crossing (Montgomery, Alabama) four-star guard Tank Jenkins, but the 6-3, 325-pounder signed with Texas A&M.

Jenkins was just one of a handful of uncommitted targets the Rebels missed out on Wednesday.

Oxford produces one of their largest NSD classes with…