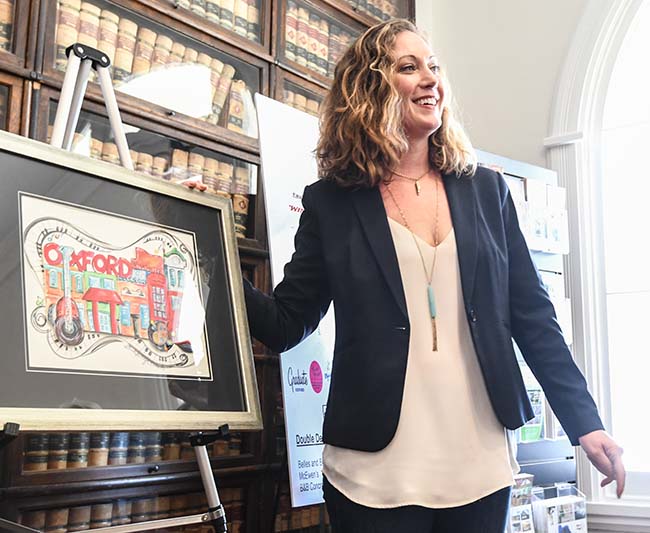 Sarah Kathryn Bridgers unveils her art which will be used on the 2018 Double Decker Arts Festival poster during a press conference at Visit Oxford in Oxford, Miss. on Thursday, February 8, 2018.

American Indie rock band, Cold War Kids, will be this year’s headliner at the annual Double Decker Arts Festival on April 27 and 28.

The full musical lineup was announced at a press announcement this morning at the Visit Oxford off the Square. Cold War Kids will take the stage at 8:30 p.m. on Saturday, April 28. From Long Beach, California the band credits such artists as Radiohead and Bob Dylan as influences on the group’s sound. Their sixth album was released just last April and hit the top 100 album chart in the U.S., peaking at the ninth and tenth spots under the Alternative and Rock charts.

This year’s 23rd annual Double Decker Arts Festival will feature the same great food, music and art that has made the event one of the most popular in north Mississippi, and some could argue one of the best attended in the state of Mississippi with crowds that top 50,000 in past years.

A two-day event, the festival has become a regional tourist attraction that brings in visitors from hundreds of miles away. Yet, it has also managed to retain the local festival vibe, and it’s still a place where people come each year to see familiar friendly faces, listen to great music, buy some one-of-a-kind art and sample Oxford’s well-known food offerings. The poster features the iconic double-decker bus along with the red phone booth and a colorful snapshot of the Square, surrounded by musical notes and a painter’s pallet.

The festival is sponsored by the University of Mississippi Museum, who was gifted the sponsorship by Ole Miss Athletics.

Taking its name from the town’s authentic double-decker bus imported from England in 1994, this year’s festival will be held April 27 and 28 on the Square.

This year’s Friday night concert will again take place in conjunction with Thacker Mountain Radio Hour and will be free and open to the public. This will be the sixth year for the partnership between Thacker and the festival.

Before Cold War Kids take the stage Saturday night, the day’s musical entertainment will begin at 10 a.m. and go all day.

All music will be performed on the stage located on North Lamar Boulevard off the downtown Square.

To start off the main event Saturday morning, Sharde Thomas will perform at 10:15 a.m. Other Saturday daytime acts will include the Como Mamas, Don Bryant, Squirrel Nut Zippers, and Tank and the Bangas.

Evening acts will include Whitey Morgan and the 78’s, followed by Houndmouth before Cold War Kids take the stage to end the night.

This year’s food court will feature a sampling of culinary treats from local restaurateurs who will offer special menu items that are special to the Double Decker Arts Festival.

Saturday activities will kick off at 8 a.m. with the Oxford-Lafayette County Chamber of Commerce Spring Run 5k walk and 10k run. Winding through the University of Mississippi campus and nearby Oxford neighborhoods, the two courses are fun for both beginner joggers as well as experienced athletes. There is also a Kid’s Run at 8 a.m. The Spring Run is also celebrating its 20th anniversary.

“This is a great way to kickoff Double Decker with a fun, healthy event,” said Pam Swain, Spring Run chairwoman.