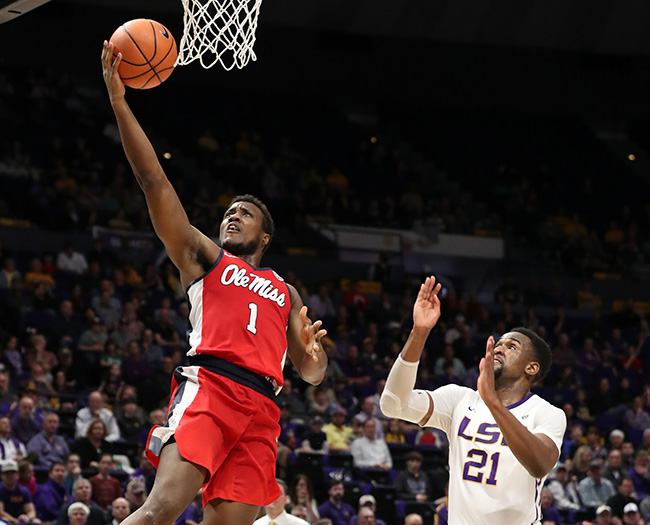 Ole Miss’ road woes continued Saturday. And so did the Rebels’ slide in the second half of their Southeastern Conference slate.

Ole Miss dropped its fifth straight game with an 82-66 loss to LSU at the Maravich Assembly Center. LSU outscored the Rebels 45-29 in the second half to turn a tie game at the half into a rout on the way to its third straight home win.

Meanwhile, it was the seventh loss in eight games for Ole Miss, which fell to 0-8 in true road games.

Center Duop Reath paced LSU with a game-high 26 points on 10 of 12 shooting while forward Aaron Epps had 11 points and nine rebounds as the Tigers doubled up Ole Miss 44-22 in the paint. Skylar Mays and Tremont Waters added 17 and 11 points, respectively, for LSU, which still shot 50 percent from the floor despite going just 6 of 23 from deep.

Deandre Burnett and Bruce Stevens each had 16 points for Ole Miss, but the Rebels didn’t get much from anybody else. Terence Davis (3 of 9) finished with seven points and nine rebounds but combined with fellow guards Breein Tyree (10 points; 3 of 11), Markel Crawford (4; 0 of 4) and Devontae Shuler (2; 1 of 7) to make just 22.5 percent of their shots.

Ole Miss shot 37.1 percent for the game and connected on just two of their final 15 3-point attempts.

The Rebels will try to snap their longest losing streak of the season Tuesday at home against Arkansas before playing back-to-back road games at Mississippi State and Missouri. Tip is set for 6 p.m.

Lafayette’s season ends with second round loss to Olive…