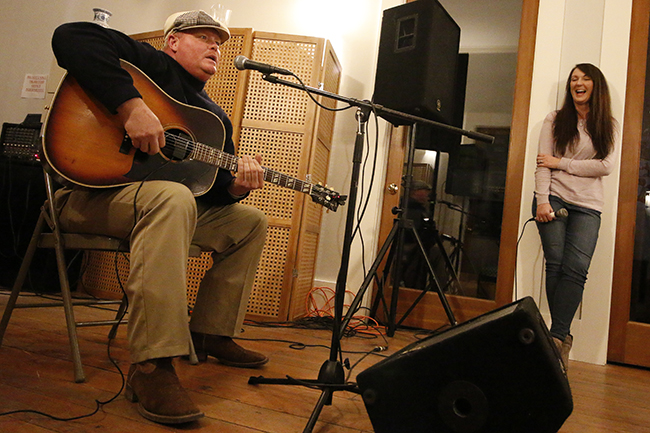 Hosted in the small hall on the second floor of an office building on the downtown Square, the aptly named Small Hall Concert Series provides musicians and lovers of music a chance to get close and personal and build a true connection during the show.

Local and touring artists perform at Small Hall, located at 1109 Van Buren Avenue, from 7 to 9 p.m. on the first Wednesday of the month.

The hall can seat about 60 people. The performer sits just a few feet away from the audience, who are welcome to bring their beverage of choice to the hall.

“The event grew out of Music in the Hall launched by Daniel Morrow to promote live music and create an environment where the audience and artist can connect,” said Wayne Andrews, director of the Yoknapatawpha Arts Council and sits on the four-person Small Hall committee who schedules the performances.

Also serving on the committee is Adam Gambrell, Shannon Wyatt and Luke Fisher.

Fisher said the Small Hall series differs from Music in the Hall in that the artists are generally solo and performing acoustical music.

“We had a bluegrass quartet once but that’s as big as it’s gotten,” Fisher said.

The performances are streamed live on the Small Hall Facebook page.

“We’re more about the intimate nature of the performance and not getting stuck on high tech recordings,” Fisher said. “We focus more on the singer and songwriter’s relationship with the audience.”

On Wednesday, the Small Hall concert series featured Mississippi singer and songwriter Mark “Muleman” Massey, who learned how to play the blues while serving time in prison at the Mississippi State Penitentiary, also known as Parchman Farm, on drug charges. At 19 years old, he was sentenced to spend 18 years in prison; however, due to good behavior and his rehabilitative efforts, he was released after six years.

Massey’s songs continue to reflect on those years and the years following his release 25 years ago when he struggled to put his past behind him.

“After you’ve done time, you think everyone’s going to forgive and forget,” he told the audience Wednesday. “I tell kids today, it’s a tough road and one they don’t want to travel. You have to do everything twice as hard as everyone else to prove yourself.”

Massey performed for about an hour and 45 minutes. He sang about lockdowns while in prison and being shut off from his family. He sang about his father’s death and the brother he lost because of a drug addiction. But it wasn’t all blue. His song, “Don’t put plastic flowers on my grave,” invoked chuckles and several in the audience sang along with the catchy tune.

April 4: Adron in partnership with the Thacker Mountain Radio Show

May 2: Of Warriors & Poets, in partnership with Local Licks Radio Show