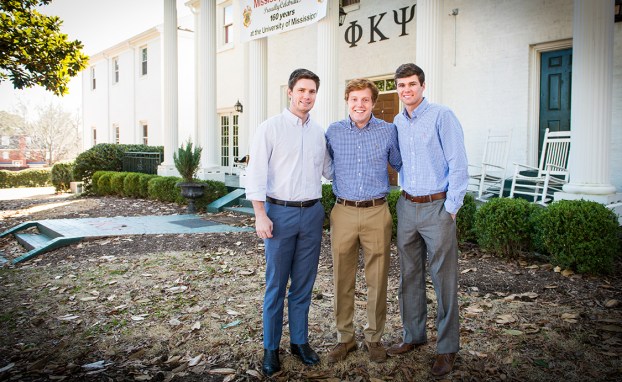 Phi Kappa Psi Fraternity Vice President Sam Dethrow, left, President Harris Jones, center, and Jake Wilson, right, have rallied the Oxford chapter to support the wellness of the Ole Miss student body by educating students about drug and alcohol misuse. The fraternity also pledged more than $31,000 to the William Magee Center for Wellness Education and will build an annual philanthrophy event to continue funraising for the center. Photo by Bill Dabney | University of Mississippi Communications.

A new generation of leadership

The most remarkable, impacting leadership most always comes from those in the rising generation who possess the focus, courage and talent to create change.

That’s why I have been so moved in the past year by some Ole Miss students who have provided grassroots leadership on their own accord and ingenuity in the name of helping their peers with drug and alcohol education and support.

Here is one example:

If you think this happened because some alumni gave them the nudge and they are simply fulfilling a membership requirement, think again: This has been a student movement.

After speaking to a group of Ole Miss fraternity leaders about the planned William Magee Center for Wellness Education on campus last year, Dethrow, a junior from Dallas, Texas, approached, saying he wanted to talk. He said Phi Psi wanted to learn more and to also share about the challenges students face and the support they needed for the misuse of alcohol and other drugs.

He was president of the Phi Psi chapter at Ole Miss at the time, about to become the Vice President, paving the way for Harris Jones to serve as president. We met for lunch and formed an instant friendship, as well as a bond for a good cause.

They didn’t have established philanthropy, they explained, but, they wanted one.

They didn’t believe all the tools needed were in place to help the student body deal with the challenges faced, but they wanted to help find the answers.

I recall fighting back a tear while looking at them across the table with profound respect.

It’s leadership moments like that which have made this endeavor on the Ole Miss campus so worthwhile.

What has transpired in the months since that first meeting is a deepened relationship with both the fraternity and its leaders, including Harris, Dethrow and Wilson. When I spoke to their pledges late last fall, for example, not an eye blinked away during some 45 minutes of intense, frank discussion.

They have since created a new fraternity officer position focused on wellness. They have picked a charity and are working to build a new annual philanthropy around it with the funds raised benefitting the William Magee Center for Wellness Education at Ole Miss.

They have actively engaged with Erin Cromeans on campus. Cromeans actively leads the education and support effort for alcohol and other drugs, seeking to benefit from available tools in fostering a positive atmosphere.

They approached their alumni financial advisor and said they wanted to make a binding financial pledge from the chapter to the William Magee Center for Wellness Education. When they got pushback – how will you pay for this? – they found a way to make a binding commitment with the full support of chapter members who promised to make good on it.

As a result, Phi Kappa Psi, a mid-size fraternity on campus in terms of membership, committed more than $31,000, helping push the center close to $1 million in gifts and pledges.

We had reconvened for a lunch one day recently when Harris and Dethrow revealed all of this to me, including the commitment they had obtained and how they planned to lead from that day forth with support in a myriad of ways, in hopes of making life better for all students, far into the future.

I was unable to fight back the tear as I once again looked across the table with profound respect.

“Thank you,” I told them, only because I could not begin to express everything I was thinking.

Nothing much has changed in that regard, since so many positive thoughts and emotions are still racing over the efforts by the men of Phi Kappa Psi, and other students doing similar work this past year.

Let’s just say it is impressive, and an honor to watch a new generation of leadership rising on their own accord to make a difference for others.

The historical customs of Valentine’s Day

By T.J. Ray You’re forgiven if you overlooked that little piece about Valentines Day in the New Orleans Daily Picayune.... read more