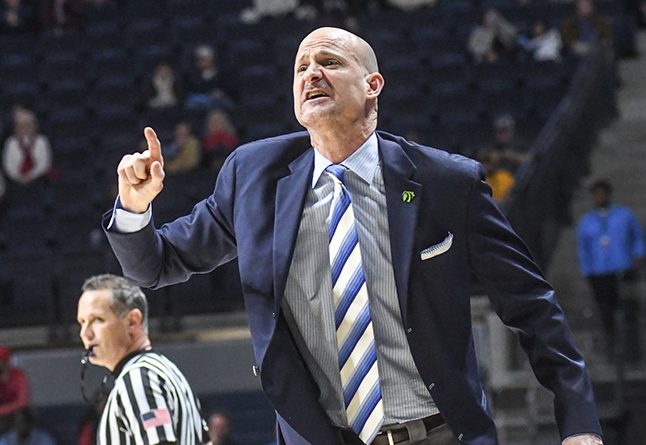 Andy Kennedy woke up Sunday with what he called “a true conviction.”

That’s how the dean of Southeastern Conference basketball coaches said he came to the abrupt decision to step down as Ole Miss’ coach at the end of the season, one that’s on track to be by far his worst in Oxford. Kennedy announced his decision at a press conference Monday afternoon after meeting with his players and members of his coaching staff.

“I’ve been truly blessed to have the opportunity to be the head coach at the Southeastern Conference in my home state for 12 years. That is a true blessing. This I know,” Kennedy said. “I also know it’s time for a new voice and new vision for this program moving forward.

A Louisville native, Kennedy’s 245 wins are the most for a coach in school history while he’s also responsible for two of the program’s eight NCAA Tournament appearances, though the Rebels are on their way to missing the tournament for the fourth time in five years. Kennedy has never had a losing season at Ole Miss, but the Rebels are in danger of that at 11-14 overall and 4-8 in SEC play.

Ole Miss, which hasn’t been to the NCAA Tournament since 2015, has lost five in a row and seven of its last eight games heading into Tuesday’s home tilt with Arkansas (6 p.m., SEC Network). The Rebels have never finished worse than a game below .500 in league play under Kennedy.

Athletic director Ross Bjork said the school will use the last month of the season — the Rebels have six regular-season games left before the SEC Tournament in St. Louis — to celebrate the accomplishments of Kennedy, who in 2006 took over a program that had just three 21-plus win seasons in its first 96 years of existence and averaged more than that in his first 11 seasons at the helm. He’s one of just five coaches in SEC history to post at least nine 20-win seasons in his first 11 seasons, joining Billy Donovan (Florida), Joe Hall (Kentucky), Nolan Richardson (Arkansas) and Tubby Smith (Kentucky).

Ole Miss ended a 10-year NCAA Tournament drought in 2013 by winning the SEC Tournament — one of just two conference tournament titles in school history — on its way to tying a school record with 27 wins. Despite having to recruit to the outdated C.M. “Tad” Smith Coliseum for much of his tenure, Kennedy, who played at N.C. State and UAB before starting his coaching career as an assistant at South Alabama in 1994, has produced 16 All-SEC selections over the last 11 years, trailing only Florida and Kentucky in that category during that span.

Kennedy’s success was a driving force in the construction of The Pavilion at Ole Miss, the $96.5-million state-of-the-art arena that became the new home for the Rebels’ basketball programs in January 2016.

“He pushed that vision,” Bjork said. “He changed the mindset and changed the culture of Ole Miss basketball. His foundation will live on for a long time. We’re going to thank him for his 12 years of service. He deserves it.”

With Memphis graduate transfer Markel Crawford, 7-footer Dominik Olejniczak and junior college All-American Bruce Stevens joining a team that had leading scorers Terence Davis and Deandre Burnett returning in the backcourt, Kennedy talked up the experience and talent of this year’s team in the preseason. But it hasn’t translated following an offseason that was otherwise tumultuous.

Kennedy has two years remaining on his contract after this season with the school deciding not extend it following last season despite the Rebels winning 22 games and advancing to the National Invitation Tournament quarterfinals — Ole Miss’ eighth postseason appearance in Kennedy’s tenure. The perception that administrators weren’t united in their support of Kennedy moving forward cost the Rebels two signees in their latest recruiting class in three-star guard Parker Stewart and four-star forward Jamarko Pickett, who transferred to Pittsburgh and Georgetown, respectively.

The decision sparked conversation about Kennedy’s job status — chatter that only grew louder as the losses mounted.

Ole Miss started 3-0 but lost five of its next seven games, including three at home in overtime.  The Rebels opened SEC play with a win over South Carolina, a Final Four participant last season, and beat Mississippi State at home a week later, but Ole Miss dropped back-to-back road games to Texas A&M and Arkansas in mid-January and hasn’t recovered.

After having several conversations earlier in the season about the team’s performance and the direction of the program, Bjork said he received a phone call from Kennedy Sunday morning in which Kennedy told Bjork he was ready to step down.

“I don’t want it to be about me and my status,” Kennedy said. “That’s not fair to these guys, and so I just wanted to get ahead of it. We can all read the writing on the wall.”

Said Bjork, “In the final analysis, Coach Kennedy feels he needs a new platform and I believe that our program needs a new voice, a leader who can build upon the foundation that is in place thanks to Andy’s leadership.”

Bjork added the school will honor the terms of Kennedy’s contract by paying him an undisclosed percentage of the salary left on his deal after this season. Kennedy is making $2,050,000 this season.

As for what Kennedy will do once his 13th season as a head coach is over — Kennedy came to Ole Miss after one season as the interim coach at Cincinnati — he said he’s “anxious to see what the next opportunity is whether that be coaching or what have you.” Asked if doing television as an analyst would appeal to him, Kennedy joked, “I’ve got a face for radio.”

The primary focus for Kennedy, who’s in his 27th season as a player or coach at the collegiate level, is to try to get things turned around amid a season that’s been unlike any he’s had at Ole Miss before calling it quits.

“It’s only the second time in those 27 that I’ve been part of a losing program in February, so this is a little bit different for me as well,” he said. “I just feel like the time is right.”