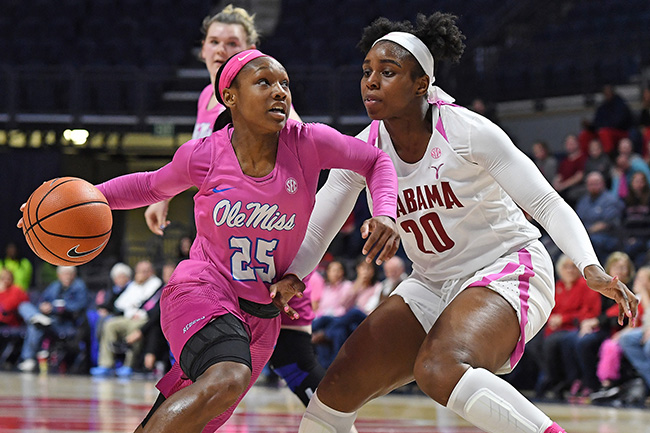 A victory, and a chance to snap an eight-game losing streak, was withing Ole Miss’ grasp. With a one-point lead and less than a minute to go the Rebels’ Alissa Alston had the ball and control of the game, until Alabama’s Jordan Lewis grabbed a turnover by Alston and ran down for a layup and what would be the winning basket.

Alabama defeated the Rebels 82-79 inside the Pavilion on Sunday in what was the latest in a string of losses for Ole Miss.

The nine-game skid dates back to Jan. 11 with a loss at No. 2 Mississippi State.

This loss is even more puzzling with Ole Miss (11-14, 1-11 Southeastern Conference) having played one of their better games during this stretch.

The Rebels came out firing in the first half, hitting 11-of-17 three-pointers and shooting 54 percent (15-of-28) from the floor. The 11 shots from beyond the arc set a new record for three-pointers in a half, breaking the previous record of nine the Rebels set against Delaware State on Nov. 18.

“They were playing confident,” Insell said of the start. “They played hard and they did the things we asked them to do. They made some shots and when you’re in the SEC you’re supposed to make them. You’re wide open”

Torri Lewis and Shelby Gibson combined for 11 of the Rebels’ 15 made three-pointers. Lewis scored a game-high 26 points while Gibson added 20 points. Alston and a returning Madinah Muhammad each scored 11 points.

Muhammad played 32 minutes in her first game back after sitting out the previous two due to a head injury she suffered against Vanderbilt on Feb. 1.

In the second half Ole Miss’ offense cooled down, shooting 39 percent (11-of-28) and made only four shots from outside the perimeter.

The difference in the game occurred at the free throw line. Alabama (15-10, 5-7) made 28 of their 34 attempts while Ole Miss only had 17 attempts, hitting 12 of them.
The Rebels were called for 22 fouls while Alabama was whistled for 17.

“There’s some key, key questionable things that happened in that game and that’s a major issue we got going on in our league,” Insell said. “We should have won the game but the foul discrepency at the free-throw line was unbelievable. I’ve never coached a game where they just parade them to the line and we’re getting bumped and everything else and we don’t get to the line. Finally we got somebody to call it, but some big, big ones were missed down the stretch.”

After getting home from a two-game road trip Ole Miss will head back out for a game at LSU on Thursday at 7 p.m. on SEC Network +.