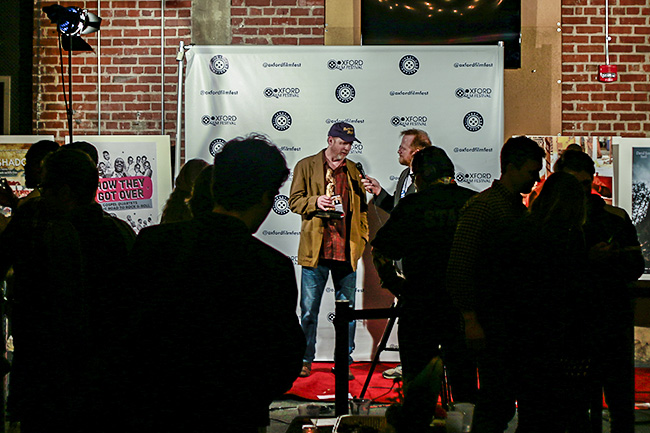 William Faulkner, otherwise known Saturday night as “the man in the poster,” made a posthumous appearance at the Oxford Film Festival Awards Ceremony.

“Faulkner,” who looked a lot like film critic Eric Snider in a suit, said he accepted the Film Festival’s offer to host the awards after being “awoken” from his eternal slumber.

“I figured it couldn’t do any worse for my dignity or be a blacker stain on my reputation than letting James Franco make films from books,” he said, invoking a round of laughter from the 200-plus audience at the ceremony held at The Powerhouse.

Snider slipped in and out of his Faulkner persona throughout the night to the delight of the audience; however, the real stars of the show were the filmmakers – many of whom were awarded the coveted Hoka Award, modeled after Chickasaw Princess Hoka and in honor of the former Hoka Theater.

Prior to the award presentations, a short film was shown explaining how this year’s Hoka awards were created. The large Princess statues were designed and created by local artist Bill Beckwith. However, this year, the awards were made via a 3-D printer at the University of Mississippi Center for Manufacturing Excellence. The awards are lighter than in year’s past and are more break resistant.

Oxford Film Festival Executive Director Melanie Addington thanked the more than 200 volunteers, 30 staff members, 50 film screeners, along with all the filmmakers and judges for making the festival a success.

“We appreciate all the wonderful filmmakers who not only told shared their stories but came to Oxford to celebrate with us,” she said at the award ceremony.

A total of 204 films – 35 features, 169 shorts and music videos – including 29 world premieres and six U.S. premieres, were selected for OFF’s 15th Anniversary edition, marking an increase of more than 30 films from last year’s lineup. In addition, more than 60 female filmmakers directed or co-directed this year’s films, aided in part by the festival’s decision to offer a 50-percent discount for submissions by female filmmakers and the continuing Alice Guy Blaché Award for Emerging Female Filmmaker, taken home Saturday night by Amanda Kopp, director of the documentary animated short, “Liyana.”

The Lisa Blount Memorial Acting Award went to Catherine Eaton for her role in “The Sounding,” that she also directed.

“This festival is amazing,” she said. “I’m really honored … The film is about a woman fighting to speak with her own voice … it’s about ‘otherness’ and all of us have experienced being that ‘other’ at one point in our lives. And I think any film that can help gender empathy in the world is an extraordinary thing and as an actor, I can’t imagine doing anything any more important.”

Taking home the award for the Best Mississippi Feature was Oxford’s own Dr. Jeff Dennis, who directed, “The Process: The Way of Pablo Sierra,” who features the pottery-making, former Ole Miss track star, Pablo Sierra.

The ceremony ended with the award for Best Narrative Feature, awarded to “The Drawer Boy,” based on the play by Michael Healey and directed by Arturo Perez Torres and Aviva Armour-Ostroff. The film is about Miles, a young actor from Toronto who lives with two aging bachelor farmers to gather stories about rural life to write a play about farming.

“It’s been really fun to be here and meet all the other filmmakers and be a part of such a small but big community,” Armour-Ostroff said after accepting the Hoka.
Other winners Saturday: