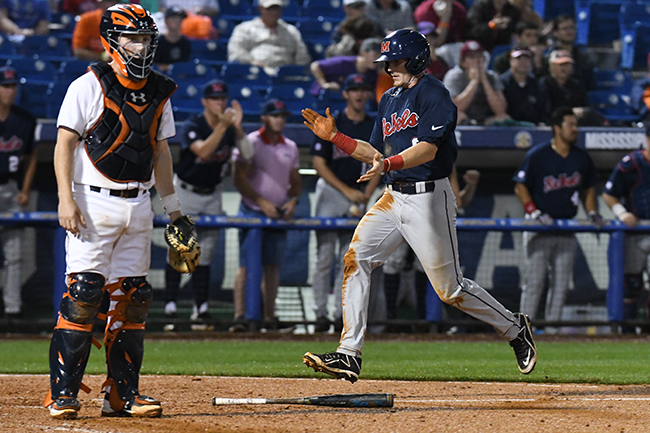 Asked about motivation for this season, Ryan Olenek got right to the point.

“Last year hurt a lot because we had such high expectations going into the year,” Ole Miss’ junior outfielder said.

Olenek was referring to the Rebels’ absence from the NCAA Tournament — a rarity for Ole Miss during head coach Mike Bianco’s tenure. With a 32-25 record last season, including a 14-16 mark in Southeastern Conference play, the Rebels missed out on the field of 64 for the just the third time in Bianco’s 17 seasons at the helm.

It’s something that’s eaten at Olenek and his teammates all offseason.

“We’re probably just as hungry as we’ve ever been,” Olenek said. “Every year, you’re expecting to get to the postseason. That’s why you play.”

Ole Miss is in the top 15 in multiple preseason polls heading into the season, which starts Friday with the first of a three-game series against Winthrop at Oxford-University Stadium. The Rebels also began last season as a top-15 team before youth in one of the country’s most competitive leagues took its toll.

That youth has given way to experience, and the Rebels believe they’ve got the talent to match to live up to the hype this season.

Ole Miss has more than half of its starting position players back along with five pitchers who got multiple starts a season ago, including preseason All-American Ryan Rolison. The sophomore left-hander will get the ball in Friday’s opener while junior right-hander Brady Feigl will go Saturday before fellow junior James McArthur takes the mound in Sunday’s finale, Bianco said.

Rolison, widely considered one of the top prospects for this year’s Major League Baseball First-Year Player Draft, was arguably the Rebels’ most consistent arm at the end of last season, posting a 3.06 earned run average in 19 appearances while holding opponents to a .242 average. Moving between the bullpen and the rotation, Feigl made six starts and had a 4.08 ERA while McArthur stumbled to a 3-6 record and a 4.73 ERA after earning All-America honors as a freshman.

Sophomores Will Ethridge (2.41 ERA) and Greer Holston (5.27) will begin the season in the bullpen, which is anchored by another preseason All-American in closer Dallas Woolfolk, but combined to start 12 games a season ago and give the Rebels flexibility should they need it in the rotation.

“They know that every day, you’ve got to come and earn your job,” Bianco said. “The good news for us is we’ve got some guys in the bullpen, and if somebody can’t handle the role as a starter, we can move some other guys there that certainly can handle it.”

Rolison, Ethridge and Greer are part of a sophomore class that came to Oxford as the nation’s top-ranked recruiting class last year but drew mixed reviews as freshmen. Looking back, Bianco said the Rebels “leaned on them too much” a season ago, but a group that includes outfielder Thomas Dillard, shortstop Grae Kessinger and catcher Cooper Johnson is expected to take the next step in its development this spring.

The switch-hitting Dillard led the nation in home runs as a senior at Oxford High but hit just .206 with four homers and 12 RBIs in 45 starts last season. With a year at the college level under his belt, Bianco expects Dillard to be a more complete offensive threat in the middle of the order this season.

“Offensively, power-wise and average-wise, I think that’s how he’s going to earn his pay so to speak,” Bianco said. “Excited about him to turn those numbers around from his freshman year.”

Dillard, Kessinger and Johnson join Olenek, center fielder Will Golsan, designated hitter Tim Rowe and Nick Fortes, the Rebels’ leading hitter a season ago, as starters back from last season. Fortes will again split time between first base and catcher with another sophomore, Cole Zabowski, set to play first when Fortes moves behind the plate.

Freshmen Tim Elko and Tyler Keenan are competing to replace Colby Bortles at third base while freshman Anthony Servideo and junior college transfer Jacob Adams are vying to fill the void left by Tate Blackman at second base. Adams and Servideo are also leadoff candidates, Bianco said.

They’re newcomers that Bianco hopes can find their role amid a more veteran-laden team to help the Rebels get back to where they’re more accustomed to being come June.

“I think all of us are ready to start anew,” Bianco said. “When you don’t make it to the postseason, obviously that’s a big blow. These guys, there’s different things that you’ve heard and we’ve challenged them. Getting to Omaha again, hosting a regional and being the team that we’re supposed to be and that the expectations are at this program.

“Motivation comes from a lot of different areas, but certainly I think we’re excited to turn the page on last year and get started.”