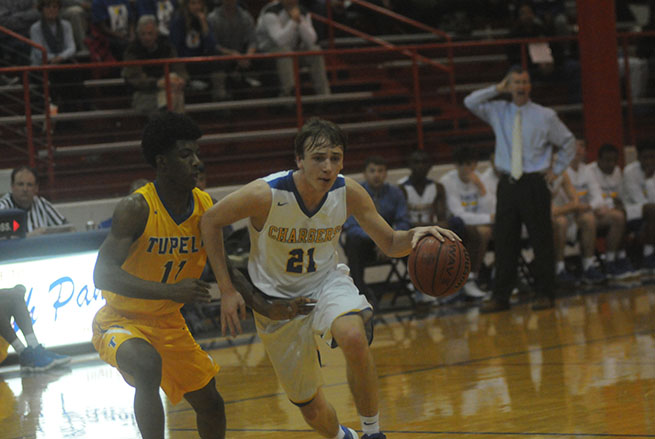 BATESVILLE — For the 20th consecutive season Drew Tyler has a team in the playoffs.

Oxford defeated Tupelo 50-35 to reach the championship game of the 2-6A Tournament at South Panola High School.

The Chargers will play Columbus on Friday at 8:30 p.m. for a chance at a first round bye in next week’s Class 6A playoffs. Tupelo will play South Panola at 5:30 p.m. in the do-or-die consolation game to try and keep their season alive.

It was the third win over the Golden Wave for Oxford (20-5). Tucker Scott scored a game-high 20 points, J.J. Pegues added 12 and Tykel Owens scored 10.

Tupelo shot 21 percent (13-of-61) from the floor and did not make one three-pointer.

“Our team played the best defense they have played all year,” Tyler said. “We answered a lot of questions tonight that surround a region tournament. We do know that we will have another home game.”

The Chargers nearly had a wire-to-wire victory but Tupelo grabbed the lead twice in the first quarter until Tucker Scott drained one of his six three-pointers to give Oxford the lead for good. Pegues pulled down a game-high 12 rebounds and Owens followed with 10 of his own to complete a double-double.

“When our guards attack the goal and our opponents shut off those driving lanes we know where the ball needs to be,” Tyler said. “We’ve got Tucker Scott behind the perimeter and he’s knocking threes down. Even when Tucker misses a the defense still have to run at him and that just opens it up for J.J. to get offensive rebounds.”

Fabian Perry and Keondre Hampton each scored a team-high six points for Tupleo.

Oxford has one more chance to extend their season. After falling to No. 1 seed Columbus 63-31 in the first game of the day, the Lady Chargers’ season in on the brink.

If they win they will earn the No. 3 seed for next week’s MHSAA Class 6A state playoffs, lose and their season will come to an end.

Oxford hung with the Lady Falcons for nearly the first five minutes of the game with a 7-7 tie. Then Columbus (16-5) took control to pick up their third win over the Chargers this season.

“Early we kind of accomplished what we wanted,” Oxford coach Cliff Ormon said. “I thought we did a good job of getting (Columbus) off rhythm. It’s been a theme this season of just our possessions, we can’t put multiple possessions in a row.”

Columbus duo of Hannah White and Deryona Smith each had a double-double. White finished with a game-high 21 points and 12 rebounds and Smith scored 14 points and pulled down 10 boards.