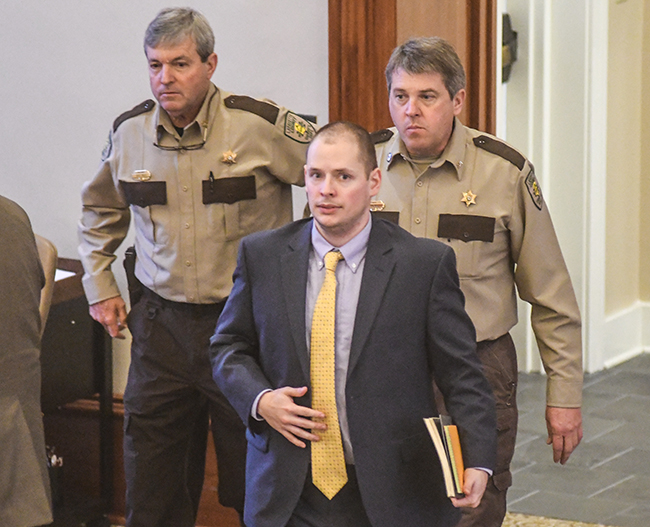 Steven “Matt” Wilbanks, foreground, enters the courtroom at the Lafayette County Courthouse for his sentencing hearing in Oxford, Miss. on Wednesday, February 14, 2018. On Tuesday, Wilbanks was found guilty of capital murder for the 2013 shooting death of Zacharias Hercules McClendon. He was sentenced to the death penalty.

After a full day of testimony during the sentencing phase of the trial of Steven “Matt” Wilbanks, charged with the 2013 murder of an Ole Miss grad student, Circuit Court Judge Andrew Howorth allowed jurors to return to their hotel room at about 5 p.m. Wednesday.

They will return at 8:30 a.m. Thursday to go into deliberations to decide whether Wilbanks will spend the rest of his life in prison or be sentenced to death.

The 12-person jury found Wilbanks guilty Wednesday of capital murder for shooting his neighbor, Zacharias Hercules McClendon, in the back of the head with a 16-gauge shotgun at McClendon’s apartment at 20B County Road 140 on Dec. 18, 2013, during the course of a robbery.

Court started at 8:30 a.m with McClendon’s father, Percy, taking the stand to talk about his son, his accomplishments in life and how his family has been affected by his death.

McClendon was a 2006 Gulfport High graduate and honor student who wanted to work in the medical profession. He had obtained undergraduate degrees from Williams College in Massachusetts and Mississippi College. He was pursuing a Master of Business Administration at Ole Miss to understand the business side of medicine so he could do more to help the less fortunate. He had been accepted to study at the University of Mississippi Medical School in Jackson, according to his family.

The defense then called up several witnesses to try to convince the jury that Wilbanks was a product of a dysfunctional family – with a mother who suffered from mental illness and moving 13 times during his childhood. Three local ministers also spoke on Wilbanks’ behalf, claiming Wilbanks has since turned his life over to Jesus Christ and has become a different person than he was when he killed McClendon.

Retired pastor and former University of Mississippi coach and teacher Johnny Flynt said he has been meeting with Wilbanks once a week for 19 months.

“I give him advice and we pray together and read the scripture,” Flynt said in court. “He’s not the same kid who did what he did. He’s saved now and he has changed his life.”

Wilbanks has been held at the Lafayette County Detention Center since his arrest in December 2013.

Flynt and other pastors testified that Wilbanks often holds Bible studies at the jail and has shown regret and remorse for killing McClendon.

Desiree Stepteau Watson, associate professor at UM and licensed social worker, was hired by Wilbanks’ defense team to examine Wilbanks. She testified Wednesday that he was from a chaotic and dysfunctional family with few limits and little guidance as a child. She said his moving around so often as a child prevented him from finding a “safe place” in the world and that he was easily influenced by other people.

Wilbanks is one of three who was charged with McClendon’s death. Derrick Boone and Joseph Lyons are both serving life in prison for their roles in the murder; however, it was Wilbanks who pulled the trigger on the shotgun, ending McClendon’s life.

According to testimony given by several law enforcement officers from the Lafayette County Sheriff’s Department on Tuesday, after Wilbanks shot McClendon, the three men stole his 2004 Nissan along with clothing, electronics, credit cards and textbooks.

Oxford School District working to prevent the flu with…