Ole Miss’ Will Golsan, Ryan Olenek on the move again with position swap 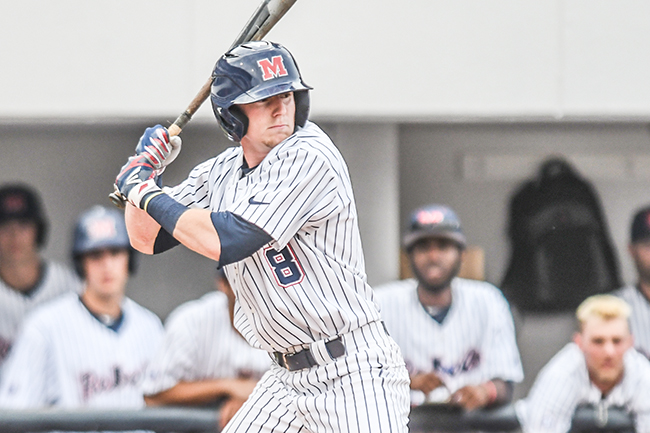 Ryan Olenek could end up playing every position before he’s done at Ole Miss. It could happen in a nine-inning span.

“(Ole Miss coach Mike Bianco and I) are talking about playing all nine positions in one game,” Olenek said with a smile.

Will Golsan is fine with moving around, too, as long as it’s not behind the plate.

Where all Olenek and Golsan end up this season remains to be seen. They will start in the outfield — Golsan will get the nod in center Friday in Ole Miss’ opener against Winthrop  (4 p.m., SEC Network) while Olenek will take over in right — but the Rebels’ most versatile players are up for just about anything.

“At some point, baseball is baseball,” Olenek said. “You’ve got to catch and throw. … I feel pretty comfortable at every single position.”

The opening-day assignments are just the latest moves for Olenek and Golsan, who have combined to do everything but pitch and catch during their time at Ole Miss. Olenek, the Rebels’ everyday center fielder a season ago, has played six positions during his time at Ole Miss while Golsan, who’s moving to center after spending last season in right, has drawn starts at seven positions as he enters his senior season.

With plans to keep moving Olenek around, Bianco decided to swap the pair. Friday will be Olenek’s first start in right since drawing 36 starts there as a freshman in 2016 while Golsan made three starts in center last season.

“I felt Ryan’s going to play some infield this year and just didn’t want to move the center field spot around a lot,” Bianco said. “It made a lot more sense to put Ryan in right field. I think they’re pretty much interchangeable.”

Golsan could also log innings in the infield if needed — he began his career at first base and got a start there last season — but Bianco likes the duo’s ability to cover ground in the outfield. Most appealing to Golsan about his latest move is the ability to roam free up the middle.

“Right and left are about the same. Different sides of the field, but it’s the same angle you’re taking,” Golsan said. “You’ve got to worry about the fence and all of that, but center, it’s just reacting to the ball. You’ve got plenty of room out there to do whatever you need to do.

“I figured I’d stay in the infield somewhere, but getting moved to the outfield, I’ve learned to love it. I feel like it’s my natural position.” Olenek and Golsan have also provided consistent offense near the top of the lineup. Olenek hit .272 last season with a team-high 17 doubles while Golsan increased his average by nearly 40 points from his sophomore season, finishing second on the team at a .312 clip with a team-best 69 hits.

Golsan’s primary focus in the offseason was to add more pop to his bat with a few extra pounds after recording 15 extra-base hits last season. He said he’s up to 190 pounds after playing last season at 182 — a moderate increase he feels won’t affect his speed or athleticism.

“I feel more powerful at the plate,” Golsan said.

Olenek bounced around the lineup last season, spending some time in the leadoff spot and ending the year in the 5-hole. Hitting second or third feels the most comfortable to Golsan, but both players are staying ready for anything.

“Wherever they need me is where I’ll be,” Olenek said.