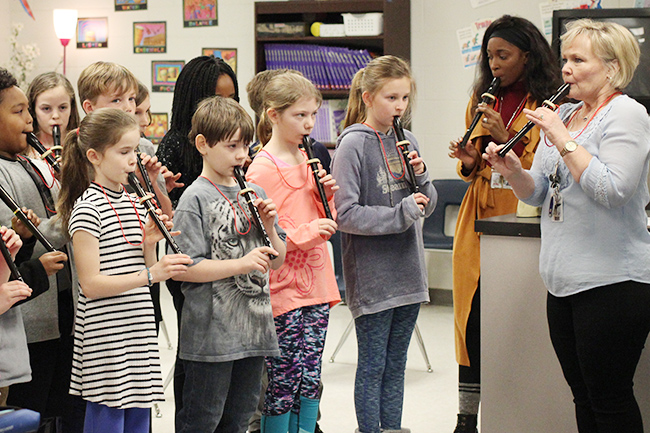 On March 26, 1,000 students from the Oxford School District will have the opportunity to attend and perform with North Mississippi Symphony Orchestra as part of the Carnegie Hall Link Up program.

However, the students are still in need of donations to cover the cost of the event, which will be held at the Gertrude Ford Center.

The program, which is a part of music curriculum in other school districts across the state, will feature students in third through sixth grade, who will sing and play the violin and recorder.

The program will cost a total of $15,000, which includes hiring the professional orchestra, rehearsal and transportation costs and the cost for performing two concerts during the day. So far, OSD has donated $7,500, and both OIS and Della Davidson Elementary have donated a combined $3,000. Living Music Resource has donated $400 as well.

Nancy Balach, a professor of theatre at Ole Miss, director of Living Music Resource and mother of three children in OSD, says the funds for the program could be relatively easy to obtain.

“For only $15 a child, they are getting this program created by Carnegie Hall. You couldn’t buy a single music lesson for that,” she said. “How amazing would it be if we as a community said, ‘You know what? I’m going to give $5,000.’ If only three businesses pledged to do that every year, this will be something that will continue to happen in our community for years to come.”

Those interested in making donations can send them to Oxford Intermediate School, care of Carnegie Hall Link Up program.

Balach has been part of the program for many years, and has worked with over 13,000 students in the state. She says Link Up is unlike any performing arts program she’s worked with.

The program, titled “The Orchestra Swings,” will teach students about jazz music as well as traditional orchestral music. The students will perform songs by Duke Ellington, including “Duke’s Place” and “It Don’t Mean a Thing.” They are also learning the classic George Gershwin song, “I Got Rhythm” and the traditional song “When the Saints Go Marching In.” The students began learning the pieces in October of last year.

In addition to the student performances, the orchestra will also play songs by Leonard Bernstein and Dvorak for the students to listen to.

Carol Trott, the music teacher at Oxford Intermediate School, says the lessons learned through Link Up will be invaluable.

“I hope my students learn the amount of teamwork involved in performing together as a group.  I also hope students learn about the opportunities they have to someday be a part of a professional orchestra and support the arts in their local community,” Trott said. “Additionally, students are meeting the state standards in music which include performing music, listening to and analyzing music, and making connections with music in everyday life.”

Nearby schools have participated in the program over the past few years, most notably in Lee County School District, home of NMSO. Because OSD already provides a variety of educational experiences for its students, Balach says adding the program seems like a no-brainer.

“I’m coming at this from many different angles, predominantly as a mother with three kids in the Oxford school district,” she said. “I feel like there are great things going on in Oxford, but we’re not providing something like this for our students.”