No. 19 Georgia holds off an Ole Miss rally as Rebels drop 11th straight 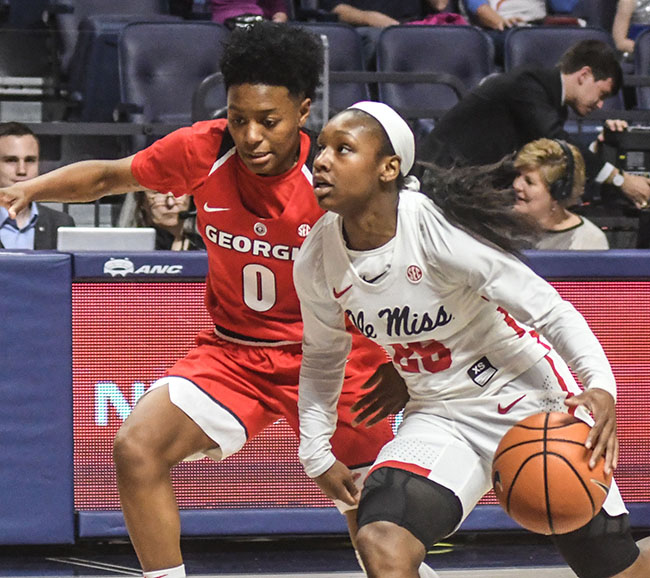 Ole Miss has two games left in their regular season. Two more chances to end a losing streak that has lasted for nearly six weeks.

The skid did not come to a close on Monday with the Rebels falling to No. 19 Georgia 66-52 inside The Pavilion. It is their 11th consecutive loss, tying their previous longest skid to end the 2015-16 season.”When you lose there’s not a lot of positives you can draw from that,” Ole Miss coach Matt Insell said.

“My job is to get everybody playing hard at the same time. We’re working towards that each and every day. …I see a lot of kids that are playing better, playing hard. Obviously, you don’t see the reward for it and that’s them getting better.”

Madinah Muhammad scored a team-high 18 points for the Ole Miss (11-16, 1-13 Southeastern Conference) and Alissa Alston added 10 as the only two Rebels in double figures. Muhammad joined the 1,000-point club with her performance on Monday.

After scoring 18 points against the Rebels in their Feb. 4 meeting in Athens, Georgia, Caliya Robinson was even more dominant on Monday in Oxford. Robinson scored the Bulldogs’ first 10 points of the game and finished with a game-high 28 and pulled down 10 boards.

“I was real, real happy with our fight in the second half,” Insell said. “But when you turn the ball over  15 times in the first half and let Robinson dictate everything early in that and got Georgia going early. When you get down that big you give so much to get back in it and when you’re back in it it’s tough on you.”

The Bulldogs’ hot start in the first half was matched by Ole Miss’ start to the second. Trailing by 17 points at halftime, the Rebels started the third quarter on a 15-6 run and cut Georgia’s lead to four heading into the final quarter. Georgia answered and was able to slow down the pace in the fourth.

“We just got settled,” Georgia coach Joni Taylor said. “Ole Miss did a good job pressing us and attacking us offensively. We just settled in and they went man in the fourth quarter and it allowed us to get and run a little bit and just regain our composure.”

Ole Miss shot 29 percent in the first half and 34 percent in the second. Ole Miss will play their final home game of the season on Thursday when they play Kentucky before finishing up the regular season on Sunday at Auburn. As one of the bottom four seeds in the conference, the Rebels will play in the first round of the SEC Tournament in Nashville on Feb. 28.