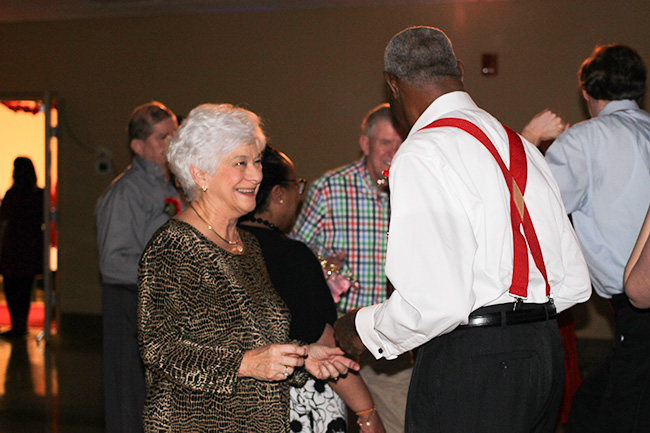 Self-Advocacy For Everyone hosted their first ever SAFE Winter Gala for special needs adults on Friday night.

The event, which was held at Saint Andrew’s Methodist Church, was designed to promote social activity and peer integration for special needs adults in the area, with people traveling from as far as Winston County to attend.

Mason Buckner, one of the guests and an active member of SAFE, says attending events like the gala and participating in the Let it Roll bowling league are some of his favorite activities.

“I’ve been a part of SAFE for about three years,” Buckner said. “I get to meet a lot of people, and all my friends are here.”

Dawn Dziduch, who started the local SAFE group with her husband Steve and other volunteers, says events like the gala provide many opportunities for those in the adult world with special needs.

“The schools do a great job in mainstreaming, integrating and socializing their special needs students, but in the past, once they aged out of school there was little out there for them to do socially,” Dziduch said. “SAFE, Let it Roll [bowling league] and the Winter Gala have helped to change that, as well as Vibes and Communicare Connections.”

According to Dziduch, the idea for the gala came from the SAFE participants themselves, many of whom didn’t attend prom or simply wanted an occasion to dress up.

“They had talked about having a dance for some time and now had the money to do it,” she said. “A committee was formed and Saint Andrew’s United Methodist Church was decided on for the venue. This also ties in with Saint Andrew’s new ministry for people with special needs.”

Attendees were able to walk in on a red carpet, courtesy of Stout Carpets, and pose for the camera before hitting the dance floor. Several members of the community donated their time and services for the event, including photographer Daneel Ferreira, Stonewater Adolescent Recovery Center, Pi Kappa Phi, Communicare Connections and Vibes Day Program.

Oxford Floral and Bette’s Flowers provided flower arrangements and buds for corsages and boutonnieres, which were assembled by engineering students at Ole Miss.

In addition to members of SAFE, Saint Andrew’s special needs Sunday School class also participated. Rev. Billy Owen, the minister at Saint Andrew’s, says he was happy to be involved with the event.

“They had a good idea, and I said, ‘We’ll do whatever we can to help,” Owen said. “They have the activities in the daytime, but this is the first time they’ve been able to dress up and have a real evening event.”

Heather Bouchillon, who traveled from Louisville for the gala, says getting to have fun with her friends was worth the long drive.

“All my friends are here, and they’re in SAFE too,” she said. “I’m so excited to be able to dance with all of them.”