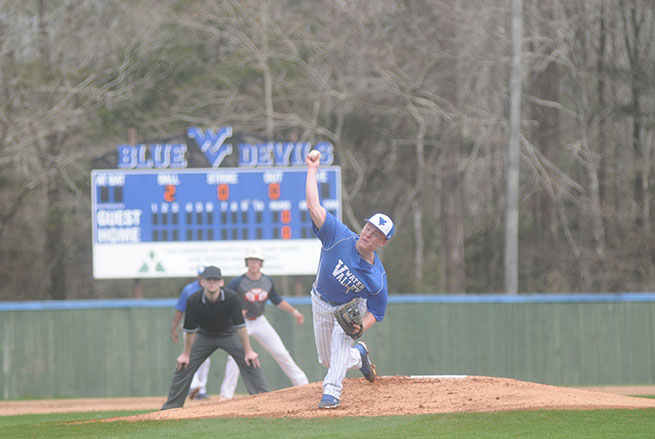 Water Valley is young, but they are experienced.

With only 2 senior and one junior, Water Valley’s youth is going to have to be relied on heavily to succeed. On Monday they got their first chance at showing what they can do and the returns were not favorable.

In the Water Valley Jamboree the Blue Devils fell to South Panola 15-1 in the opening game of the day. The game was a four-inning affair and mistakes were sprinkled throughout.

Senior Gavin Darby dropped a lazy-fly ball in right field, there were base running gaffes including Jacob Truss losing track of how many outs one inning and walking off his base to the dugout.

“I think we did a lot of things that are out of character for a lot of us,” Water Valley coach Jeb Lee said. “There’s plenty of improvement to go around. Starts with me. I made some mistakes today that I hope are uncharacteristic. I thought we had a lot of nerves.”

Darby will be one of the key guys on the mound for Lee along with sophomore Blayne Clark. Clark took the mound against South Panola and struggled with his location.

Clark is one of six sophomores on the Blue Devils’ roster and one of five that started. Along with Clark and Truss, Grant Burress, Martavious Rockett and Taylor Dean took the field. Dean came in as relief for Clark in the final stages of the game against South Panola after starting at third base. The lone junior is Chapel Hyde.

Nine players on this season’s roster saw playing time a season ago, including Dre McCrae who played as a seventh grader.

“It’s why these (games) are so important to play,” Lee said. “On the mound we’ve got to compete better. We’re returning a lot of experience. We’ve just got to meet those expectations. …We’re still young, but we’re all experience now. The young card is not even a factor in my opinion.”

Water Valley officially kicks off the season on Friday when they play Ripley at 5 p.m. as part of the New Albany Tournament. They will play New Albany on Saturday at 6:30 p.m.