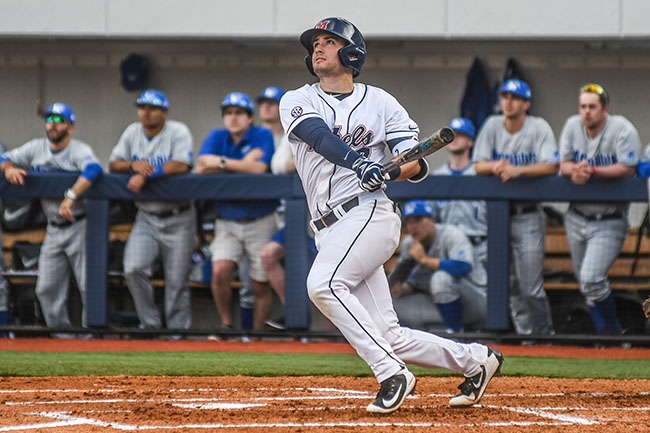 With its bullpen showing vulnerability for the first time this season, Ole Miss went to its All-American closer.

It was dicey, but Dallas Woolfolk delivered.

Woolfolk came on for Will Stokes with two on and nobody out in the top of the ninth with the Rebels holding a four-run lead against Memphis. Cale Henneman greeted the hard-throwing right-hander with an RBI single before Josh Rooker drew the Tigers closer with a one-out RBI single to left, but Woolfolk fanned the last two batters he faced and got all three outs via strikeout as No. 9 Ole Miss hung on for an 8-6 win Tuesday at Oxford-University Stadium that kept the Rebels unbeaten.

Ole Miss’ bullpen allowed just one earned run in 11 innings in the Rebels’ season-opening sweep of Winthrop over the weekend but allowed four on nine hits against the Tigers over the final five innings in relief of sophomore Houston Roth, who got his first collegiate start after coming out of the bullpen last season.

“This weekend, we did something we talked about all year leading up to the season — making pitches and getting off the field, not giving up that big clutch hit by the other side and then of course offensively doing the opposite,” Ole Miss coach Mike Bianco said. “Today, we didn’t do that as well, but the good thing is if you’re going to have a good bullpen, guys got to come out and put that fire out and come out with people on when the fire’s hot and be able to deliver some pitches.”

Nick Fortes hit home runs in his first two-at bats — a two-run shot in the first off Memphis starter Danny Denz (0-1) and a three-run bomb in the third — to set the tone for an Ole Miss offense that continued its momentum from the weekend. By the time Thomas Dillard followed Fortes’ sacrifice fly with an RBI double in the fourth, the Rebels (4-0) led 8-2.

Fortes finished with three hits and six RBIs. Shortstop Grae Kessinger went 4-for-5 with a double while third baseman Tim Elko added a pair of hits for the Rebels, who’ve had at least 12 hits in three of their first four games.

“We’re a little more mature,” said Fortes, who matched his hit total from the weekend. “We’re not letting at-bats early in the game get to us late. We’re learning and adjusting as the game goes on, and I think that’s kind of a big deal for us.”

Roth (1-0), making his first start since the 2016 MHSAA Class 5A championship series during his senior season at nearby Oxford High School, spent most of his four innings working out of trouble. The right-hander got back-to-back strikeouts to strand a runner at third in the second and used a punchout and a groundout to escape a one-out, two-on jam in the third before Memphis (2-2) eventually struck with Kyle O’Keefe’s two-run homer in the fourth.

Roth walked three and struck out six, getting pinch hitter Evan Bell swinging to end his final inning of work. He threw 44 of his 77 pitches for strikes after throwing 51 pitches in three innings of relief Friday.

“It really wasn’t the position we wanted to put him in Friday, but he was the best man for the job,” Bianco said. “We just wanted him to kind of get his feet wet and get ready for this start, so he threw a little too much for this start and that kind of winded him a little bit.”

Roth said he didn’t feel tired after his final inning Tuesday, “but as the game wore on and the amount of pitches you’re throwing, it can make your arm worse.”

Junior college transfer Austin Miller limited the Tigers to one run in two innings of relief in his Ole Miss debut. Greer Holston retired three of the four batters he faced in the seventh but gave up three straight hits to start the eighth before Stokes came on and retired three straight batters to keep it an 8-4 game.

Memphis put the first two on against Stokes in the ninth with a single and a walk before Woolfolk took over, bearing down to work around the Tigers’ two hits and notch his second save.

“Will (made pitches) tonight and I thought Dallas did that tonight,” Bianco said. “Greer did it. He didn’t do well coming back out, but I thought they all did when they jumped in there in the fire. They all pitched pretty well.”

Ole Miss will return to O-U Stadium this weekend for a three-game set against Tulane starting Friday. First pitch is set for 4 p.m.

What will Ole Miss’ football assistants be paid in…