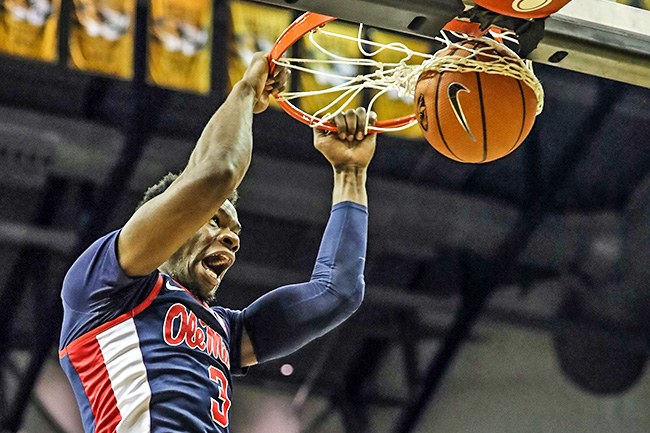 The odds were stacked against Ole Miss.

The Rebels took a seven-game losing streak and the SEC’s worst record to Missouri, a team widely projected to be a part of the NCAA Tournament field come March. They did so having not won a road game all season under the direction of former assistant Tony Madlock, who was making his head coaching debut two days after Andy Kennedy announced his immediate resignation amid the program’s first losing season in 13 years.

The Rebels, who avenged their 75-69 loss to Missouri in Oxford on Feb. 6, were 0-9 on the road and 0-3 in overtime games before knocking off the Tigers, who were projected as high as a No. 7 seed for the NCAA Tournament by ESPN analyst Joe Lundari entering the day.

But Ole Miss rallied from a six-point deficit with 2:38 remaining in regulation, tying it at 84 on Breein Tyree’s floater with three seconds left to send it to overtime. Ole Miss went up 88-85 on a pair of free throws from Tyree and led the rest of the way as Missouri went 0-for-8 from the field in overtime and missed its last five free throws.

Tyree led all scorers with 25 points on 9 of 22 shooting while Terence Davis had 19 points for the Rebels, who went 15 of 16 from the free-throw line and scored 19 points off 21 turnovers to overcome a minus-8 disadvantage on the glass. Bruce Stevens and Markel Crawford added 13 and 11 points, respectively.

Ole Miss will try for its first winning streak since late December on Saturday against No. 19 Tennessee at The Pavilion. Tip is set for noon.

Madison Central ends Oxford’s season in first round of…