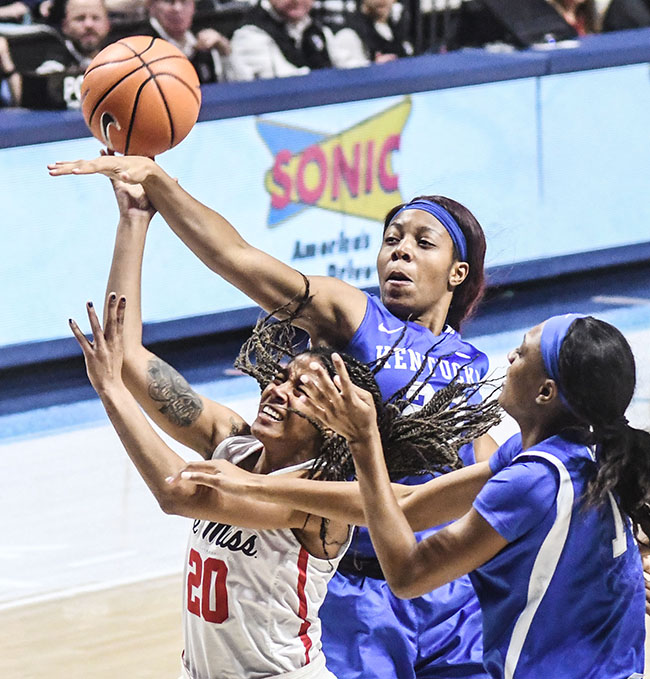 Ole Miss tied a program record on Thursday night, but it is not one they will be happy with.

The Rebels fell to Kentucky 79-71 in what appears to be their final game to be played inside The Pavilion this season. It is their 12th straight loss, tying the longest losing stretch in program history which was set in the 2011-12 season.

This is also the longest losing streak of the Matt Insell era.

Ole Miss (11-17, 1-14 Southeastern Conference) held a five-point lead late in the first quarter, but Kentucky closed the first 10 minutes with a 6-0 run to retake the lead and did not relinquish it. The Rebels would make runs throughout the game, getting to within two points, but the Rebels’ defensive inefficiencies helped Kentucky (14-15, 6-9) keep a lead.

“That’s who we are right now,” Insell said. “We don’t get stops. That’s what’s got to change. We’ve got to start getting stops. We’ve got to start making the plays instead of fouling people, putting them on the free throw line. Instead of just letting them shoot 60-70 percent from the field in the first half. That’s on us and our attention to detail defensively and that’s got to change.”

Kentucky shot nearly 82 percent in the second quarter (9-of-11) to give them a 10-point cushion at halftime. The Wildcats cooled in the second half, shooting 33 percent, but Ole Miss could never get any closer than nine points.

Maci Morris paced the Wildcats with 20 points. Dorie Harrison scored 13 points off the bench and Taylor Murray added 12. Morris is Kentucky’s leading scorer with 16.9 points per game and scored 13 of hers in the first half.

“I thought in the first half we were able to turn them over some, much more than the second half, and that led to scores,” Kentucky coach Matthew Mitchell said. “I think that was really the big difference in the game.”

Kentucky scored 22 points off 17 Rebel turnovers. The two teams were dead even with 28 points each in the paint.

Defense may have been a issue for the Rebels, but their offense was anything but. They shot nearly 45 percent from the floor and went 10-of-22 from 3-point range. Ole Miss had 24 assists on 26 made shots.

“Offensive production and what we’re doing offensively is working,” Insell said. “You go back to all these games (where) we’re scoring points. We don’t get stops. … You score 71 points in a league game at home, you’re supposed to win those.”