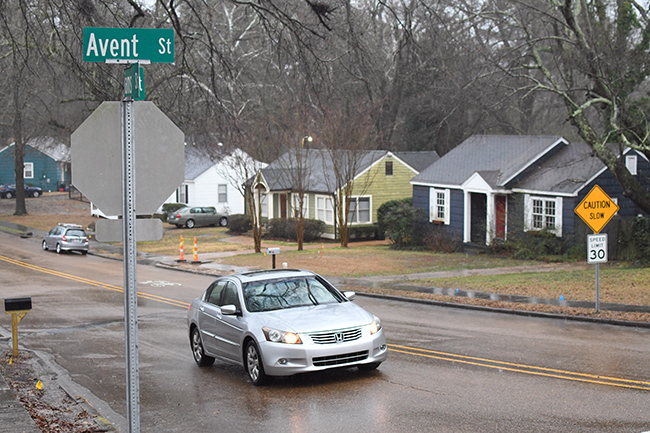 City planners are exploring creating a new historic district in the Avent Acres area, in Oxford, Miss. on Thursday, February 22, 2018.

City planners are looking to preserve the history of the homes built in the Avent Acres neighborhood after World War II by potentially creating a new historic district around the area.

The Oxford Planning Department will be seeking a grant from the Certified Local Government program — a program jointly administered by the National Park Service and the state’s historic preservation office.

“As a certified member of the CLG program, Oxford is eligible to apply for grant money that helps our city develop and maintain its local historic preservation initiatives,” said planner Paige Barnum.

“Money would be used to hire a consultant to do the necessary footwork — surveying, photographing, mapping, historical research, oral interviews, drawing a site or building plan, presenting to the state’s National Register Review Board, et cetera,” Barnum said.

No formal boundaries for the possible district have been created yet, as the city must first study the areas that may be eligible as resources in a historic district; however, the study area includes about 100 homes along Avent and Combs streets and Williams, Sisk and Chandler avenues.

When a survey is done, a qualified professional consultant identifies and records information about properties and sites in each boundary and completes a report of each property. These reports discuss the architecture of a property, its cultural or historical significance, the integrity of the structure — if it still generally resembles what it looked like when it was built.

“With grant monies, we would hire a professional to produce those reports for each property surveyed and use the findings to determine whether enough properties are considered ‘contributing resources,’ Barnum said, “For example, any building, object, or structure which adds to the historical integrity or architectural qualities that make the historic district, listed locally or federally, significant — as to warrant a new historic district.”

If the survey reports that there are many contributing structures within the area studied by the consultant, the city’s Historic Preservation Commission will consider submitting a new historic district boundary map to the mayor and the Oxford Board of Alderman to create a new district. No local district can be created until the Mississippi Department of Archives and History also analyzes the findings and proposed boundary.

The city will would then hold at least one formal, noticed public hearing to discuss the proposed designation and boundaries. Within 60 days of that public hearing, the Board of Alderman would then either vote to adopt the ordinance to create the local district as proposed, reject it entirely, or adopt it with modifications.

“Depending on the level of interest, more meetings could be planned,” Barnum said.

After WWII, the Avent family subdivided some of their land to create the Avent Acres subdivision, according to Barnum. On the small lots, modest tract homes could be built.

“That subdivision ultimately helped to create affordable housing for Oxford’s returning veterans as the veterans were benefitting from FDR’s GI Bill and its low interest, no money down home loans,” Barnum said. “In the Avent Acres subdivision, young, reunited families that had given so much for the country could own their own home, achieve that American dream. We are fortunate that many homes in the area have remained unchanged, modest and intact, most probably thanks to their use as student and rental housing.

“While most people think of the antebellum and Victorian mansions throughout the state as very worthy of preservation, many have overlooked architecture of more recent decades, even though they present a very compelling part of Oxford’s history since so little was built from the late 1920’s until after WWII.”

Homeowners owning property inside of a historic district are often eligible for a state income tax credit equal to 25 percent of qualified expenses of rehabilitating historic homes or businesses; however, most renovation or remodeling plans must be approved by one of two commission in Oxford. The Oxford Historic Preservation Commission oversees residential renovations and projects and the Courthouse Square Historic Preservation Commission oversees historic properties in the downtown Square area.

​NG Armory to be renovated for shared use with…