Lafayette’s defense sends them past Lewisburg, into 5A quarterfinals 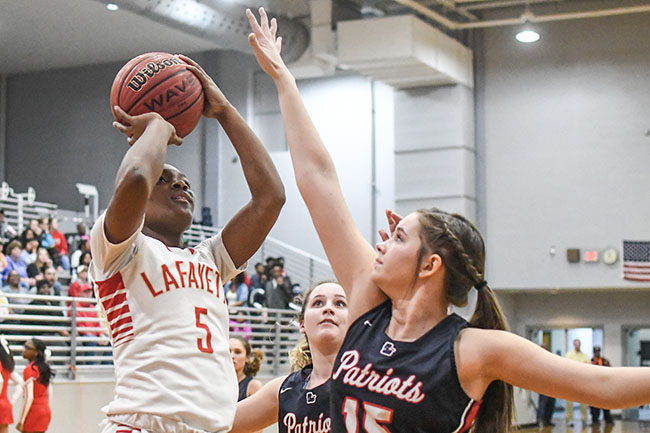 Lafayette is once again Jackson bound.

The reigning Class 4A champions are two wins away from competing for their second straight state championship and first in Class 5A. The Lady ‘Dores defeated Lewisburg 53-39 in the second round of the MHSAA Class 5A state playoffs inside the LHS gym on Friday night.

The win sends the Commodores to the quarterfinal round where they will face Brookhaven, who defeated South Jones 61-58, at 10:30 a.m. at Jackson State University next Friday.

Lafayette (23-6) proved for the second time in a week they can win in different ways and without one of their star players on the floor. Azariah Buford missed her second straight game after suffering injuries in a car wreck the night of Feb. 15 in Mooreville. Buford will see a doctor next week to be evaluated on when she might be able to return this season, if at all.

“We’re going to focus on playing whether we have her or not,” Lafayette coach Shayne Linzy said. “We hope that she’s available. If not, we’re going to keep working. …That win against Saltillo in a hostile environment, that game really showed these girls that they could do it. Tonight’s game it reiterated the fact that ‘hey, we can play.’ We just got to stick to what we do well.”

A combination of timely offense and a stifling defense helped send Lafayette back to the capital city for the third time in as many years. The Commodores controlled the flow of the game from the opening tip-off to the final whistle, for better or for worse.

“In typical Lafayette fashion, we play hard and we play physical,” Lafayette coach Shayne Linzy said. “I felt like we controlled the tempo. I felt like we controlled the game early. Then we extend our lead then all of a sudden, we had talked about it at halftime with the girls to lets stay with what we’re doing but don’t force anything. I think we started forcing some stuff.”

After a first quarter of runs where Lafayette grabbed a 14-11 lead at the end of the first eight minutes of play the defense clamped down. Lewisburg (19-13) was shutout in the second quarter and trailed by 14 at halftime.

Since halftime of the Region 2-5A championship against Saltillo last week the Commodore defense has held their two opponents to 45 points in the last six quarters (7.5 ppq).

Offensively, the only thing that was slowing down Lafayette was themselves. Lewisburg would press which produced mixed results.

“We’d break their press like two times in a row and make a layup then the next time they’d press we’d do something totally different and I don’t understand why we’d do that,” Linzy said. “That’s just heat of the moment and playing sports.”

It was the first time in program history the Lady Patriots reached the second round of the postseason. They were paced by Ariel Tunstall’s 14 points and Kelsey Fulwood’s 12 points. Fulwood hit four three-points to account for her points.