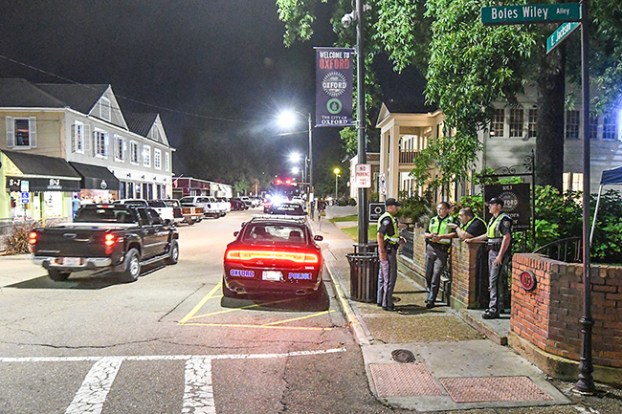 The Oxford Police Department will be working with bar and event venues to come up with ways to reduce dumping large amounts of people at one time onto East Jackson Avenue. (Photo/Bruce Newman)

Oxford Police Chief Joey East got the OK from the Board of Aldermen Tuesday to work with local bars and restaurants to implement some additional crowd control measures during busy times on the downtown Square.

East presented several ideas to the aldermen several months ago that he felt would help make the Square safer, particularly during football season and other large events. Some of the recommendations would require ordinance changes, which can take more than 3 months to implement. Ordinance changes, or new ordinances, require three readings with a public hearing and then once it’s passed, it generally takes 30 days for the new law to go into effect.

However, East said there are some measures regarding ingress and egress – entrances and exits – that can be handled without ordinance changes by simply working with the owners of the bars and event venues on the Square.

The board granted East the authority to work with those business owners to come up with ways to make crowd control easier and safer for police officers and citizens.

“We have some businesses located around the same area on the Square, that can hold 500 to 1,000 people at times,” East said. “When they close, that’s a lot of people being dumped out onto one street at the same time. We’re just looking at some ways to disperse the crowds to various areas rather than having 4,000 people in the same street at one time.”

East said he will be working with about four or five of the busier restaurants and venues to redirect their customers to leave through back or side entrances that open up onto 10th and 11th streets, rather than just East Jackson Avenue and Van Buren.

“Most restaurants and bars, due to fire codes, have multiple entrances and exits,” East said. “We wouldn’t do anything that would require a business to put in an extra door. We’ll talk to the owners and work with what is there, and try to use different ideas and techniques to help with ingress and egress.”

One possibility is asking some establishments that hold large concerts and other events to use ropes outside to guide people waiting in line to get inside on busy nights.

“It’s sometimes hard to tell who is waiting in line and who is just hanging around,” East said.

Members of Oxford High School’s Gay-Straight Alliance group gathered Wednesday to write letters of sympathy for the families of those... read more