SPRING FOOTBALL PRIMER: Competition begins in Ole Miss’ search for No. 1 running back 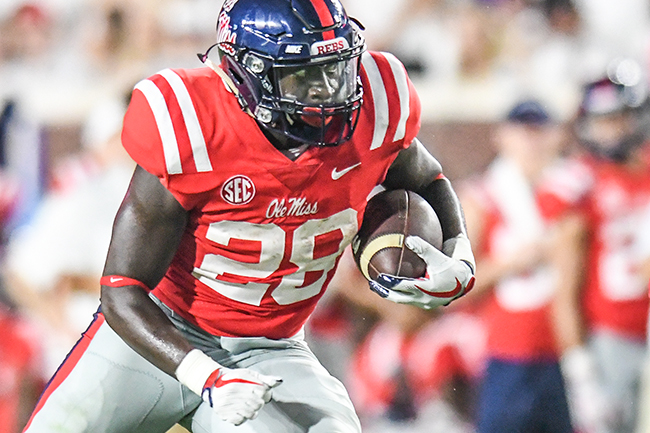 Editor’s note: This is the second in a seven-part series previewing each position for Ole Miss heading into spring football practice, which begins Tuesday.

The competition to replace Ole Miss’ first 1,000-yard rusher in nearly a decade will soon begin in earnest.

Jordan Wilkins cracked that barrier a season ago, becoming the first Ole Miss player to do so since Dexter McCluster did it in 2009, but Wilkins is preparing himself for this year’s NFL Draft. Reserve Eugene Brazley is out of eligibility, too, leaving the Rebels needing to find a No. 1 option in a new-look backfield that also needs to build depth in the rugged SEC.

Rising juniors D’Vaughn Pennamon and Eric Swinney are the most experienced backs left on the roster with 115 combined carries, though there are durability concerns with both. Pennamon underwent surgery late last season on a dislocated knee while Swinney’s first two seasons in Oxford were cut short by knee and leg injuries.

The pair complement each other when they’re healthy. The bulkiest back on the roster at 5-foot-11 and 238 pounds, Pennamon can wear on a defense as a downhill runner while Swinney, at 5-9 and 214 pounds, is a blend of power, speed and quickness that can pick up yards in a variety of ways.

The backfield will add some more size with the addition of Armani Linton, who’s making the move from safety this spring after playing mostly on special teams and recording just six tackles his first two seasons with the Rebels.

D.K. Buford also returns in a reserve role. The former Lafayette High standout, known for his speed, has 25 career carries heading into his senior season.

All of them will have some new competition this spring from junior college transfer Scottie Phillips, whom head coach Matt Luke singled out as the most likely newcomer to make an immediate impact come the fall given the Rebels’ need for proven playmakers in the backfield. The 5-8, 212-pound Phillips racked up 2,282 yards and 27 rushing touchdowns the last two seasons at Jones County Junior College, earning honorable mention for NJCAA All-America honors.

Freshman Isaiah Woullard will also join the fold this spring after grayshirting last season. Woullard is two years removed from finishing as Mississippi high school’s all-time leading rusher at Hattiesburg’s Presbyterian Christian, but he’ll have to prove himself as he makes the jump from private-school competition to the SEC.