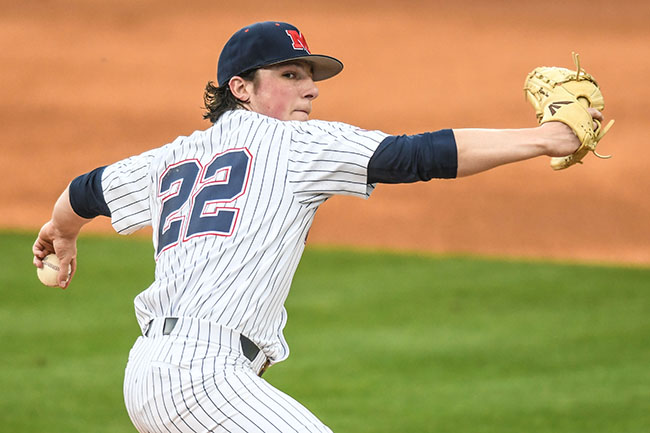 Ole Miss finished Saturday what it started Friday, though the Rebels had to sweat out their latest win.

Tulane made a late charge against Ole Miss’ bullpen, but the ninth-ranked Rebels held on for a 5-4 win at Oxford-University Stadium in a series opener delayed by rain. Dallas Woolfolk started the ninth inning with a strikeout before getting catcher Ty Johnson to ground into a 4-6-3 double play two batters later to keep Ole Miss unbeaten.

The Rebels (5-0) took a 5-1 lead into the eighth before the Green Wave (3-1) got to right-hander Will Ethridge for three straight hits in his third inning of relief. Designated hitter Matt Rowland followed Grant Witherspoon’s RBI double with a two-run homer to left to end Ethridge’s day.

Tulane put the tying and go-ahead runs on later in the inning with a pair of singles against Will Stokes, but the senior right-hander induced an inning-ending double play to preserve the lead for Woolfolk, who recorded his third save.

The opener was postponed Friday with Ole Miss leading 2-1 in the bottom of the fifth with a runner on first and two outs for the Rebels. The delay cut left-hander Ryan Rolison’s weekend short after 82 pitches.

Rolison (2-0), who struck out 12 in his first start last weekend against Winthrop, gave up a solo homer to Rowland three batters in Friday before settling in, scattering three hits, walking two and fanning nine. Ole Miss used two hits against Tulane’s Kaleb Roper (0-1), an error and Thomas Dillard’s RBI groundout in its first-bat to take the early lead before heavy rain forced the postponement four innings later.

Ethridge took the ball when play resumed Saturday and retired six of the first seven batters before the Rebels used some power to extend their lead in the seventh. Cole Zabowski led off the Rebels’ half of the inning with a homer before catcher Cooper Johnson followed with a one-out shot for his first career home run. Ryan Olenek singled home Grae Kessinger for the Rebels’ fourth and final hit of the inning before Tulane made things interesting late.

Ole Miss had just seven hits compared to Tulane’s 10 with Johnson (2-for-3) the only Rebel to finish with multiple hits.