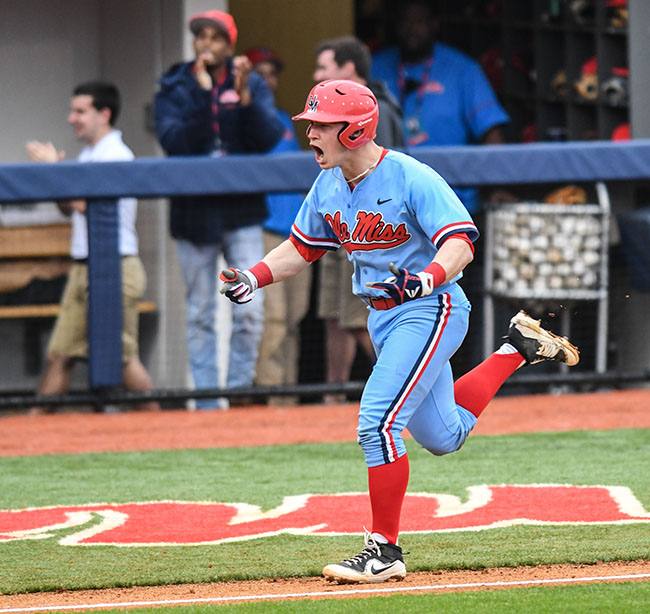 Will Golsan finally had a reason to crack a smile.

Golsan dug in for a crucial at-bat Sunday in the sixth inning of Ole Miss’ series finale against Tulane. He did so mired in a 1-for-14 slump with just three hits to his credit all season, but the Rebels’ senior outfielder had a chance to leave that all in the past with the bases loaded and Ole Miss facing one of its few deficits all weekend.

“It’s a little hard (when you’re slumping), but you’ve just got to stay within yourself,” Golsan said. “You’ve got to tell yourself it’s going to come and you’re a good hitter.”

It came at the perfect time for Golsan, who laced a two-run, go-ahead single to left as part of a five-run sixth that sparked No. 9 Ole Miss to a 6-3 win at Oxford-University Stadium. Will Stokes allowed one run in the eighth before Dallas Woolfolk retired all three batters he faced in the ninth for his fourth save as the Rebels improved to 7-0 for the second straight season.

“We’ve been able to have that knack of being able to put big innings together throughout the year,” Ole Miss coach Mike Bianco said. “Short season so far, but we’ve been able to get that big hit.”

The late outburst was a repeat of Saturday when Ole Miss distanced itself with a five-run sixth to run away with a series-clinching win. The Rebels used four hits and an error in Sunday’s frame to erase Tulane’s 2-1 lead with the big blow coming from catcher Cooper Johnson, who belted a three-run homer into the bullpen in left for his second long ball in as many days.

Golsan preceded Johnson’s dinger with the bases-loaded knock that put Ole Miss ahead for good. Golsan, who finished 2-for-4 for his first multi-hit game of the season, popped up and grounded out in his first two plate appearances before delivering the hit that was big not only for the Rebels but also himself.

“Finally told myself to stop hitting it to people,” Golsan joked afterward. “I was standing up there, trying to stay to my approach and get solid contact. It finally fell.”

Golsan also kept Tulane (3-3) from cutting into the Rebels’ lead with its biggest threat in the top of the seventh. The Green Wave used an error, a single and hit batsman with two outs to load the bases for Trevor Jensen, who sent Greer Holston’s 2-1 offering to the deepest part of the park in center before Golsan ran it down in front of the wall.

“A gamechanger in the sense that we talk about the hit but then with the bases loaded, if that ball drops, it’s a one-run game and the guy’s either at second or third and it’s a different game,” Bianco said.

Freshman Jordan Fowler (2-0) got the win after coming on with one out and two on in the top of the sixth to keep the Rebels close by retiring back-to-back batters to escape the jam. Fowler combined with Holston, Stokes and Woolfolk to scatter three hits in four innings in relief of right-hander James McArthur, who gave up a run in the first and an unearned one in the fifth on Grant Witherspoon’s RBI single after a passed ball moved Jonathon Artigues into scoring position.

McArthur worked clean second and fourth innings and stranded a pair of baserunners in the third before Jensen’s one-out double followed by a walk ended his day in the sixth after 87 pitches. He scattered six hits and struck out three.

“They’re very physical in the middle of the lineup, and the first six of seven guys in the lineup you really have to pitch to,” Bianco said. “I thought James was excellent, and then of course Jordan came in and got us out of a little jam there. That’s a big thing for us to win those little battles within the game.”

Ole Miss had just three hits against Tulane’s Keagan Gillies (0-1) through the first five innings, the loudest being a long home run from Thomas Dillard — his first of the season — to tie it at 1 in the fourth. Ole Miss chased Gillies by getting two of its first three batters on in the sixth before Golsan, Johnson and the rest of the Rebels went to work against three Tulane relievers.

“The vibe in the dugout is everyone knows we’re going to come around at some point,” Johnson said. “The offense is going to move runners along, get a bunt down, do something. It’s one through nine. There’s no really holes.”