Lafayette’s Sherman to step down as boys’ HC, retire 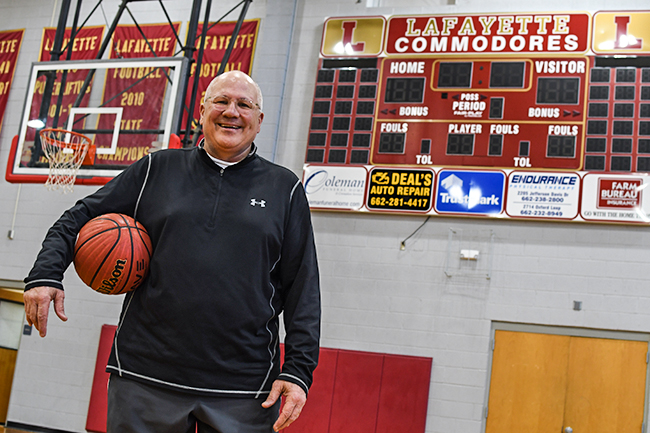 After nearly 40 years John Sherman is calling it a career.

The Lafayette boys’ basketball coach is stepping down from his position and retiring at the end of the school year.

It was a decision that Sherman was considering at the onset of his third year as the boys’ head coach. He spent his first season at Lafayette at the helm of the girls’ team before moving over when Shayne Linzy came from Oxford.

As the season progressed he realized this was the time.

Lafayette finished the season the season at 9-17 and earned the No. 3 seed out of Region 2-5A, and were eliminated by Cleveland Central in last week’s first round of the 5A state playoffs.

Sherman’s career is one that spans high school basketball with stops at Oxford, Myrtle, South Panola and finally Lafayette. With the Chargers, Sherman spent 12 seasons and helped bring the school’s first state championship in any sport with a win in the 1987 season. Former player from that 1987 team, Drew Tyler, took over Sherman’s post as head coach when he left for Starkville and a job on the coaching staff at Mississippi State.

The job with the Bulldogs lasted a year before being let go. It was then that an itch to return to Oxford hit him.

“Everyone was moving back to Oxford and we left,” Sherman said.

So, Sherman loaded up his family and made the two-hour trek back to Oxford. His wife, Robin, got her old job back but he was left searching. A spot as Lafayette’s assistant athletic director was open but he was given a call by the Myrtle principle to come be the girls’ head coach.

Sherman accepted and took the Lady Hawks to three state championship appearances, winning one of them. The season they won was the senior year of future Lady Rebel great Armintie Price.

After five years at Myrtle Sherman landed at Water Valley for eight years before finding his way to Lafayette.

“Enjoyable,” Sherman said of his time coaching high school. “That’s why I got in it. One reason was to enjoy what I was doing instead of doing something in my life I didn’t want to do for economic reasons.”

The next chapter in Sherman’s book will consist of a lot of shaved ice and traveling. Sherman’s Sno Biz is entering it’s 24th year of operation, serving Oxford and Lafayette county sno-cones as well as some tamales. It is a business that has allowed him to give back to a community that gave him so many opportunities.

“I don’t want to work all my life,” Sherman said. “I’m very, very fortunate to have a small business in Oxford. It’s a fun business. Seeing people happy. They don’t have to eat shaved ice. It’s not on the food pyramid. …so, that’ll keep me busy.”

Sherman also wants to see the rest of the country that he has not explored and maybe even see some of Europe. There may even been a rare sighting of John Sherman the spectator during next basketball season in some familiar gyms.

“More than likely,” Sherman said with a smile.