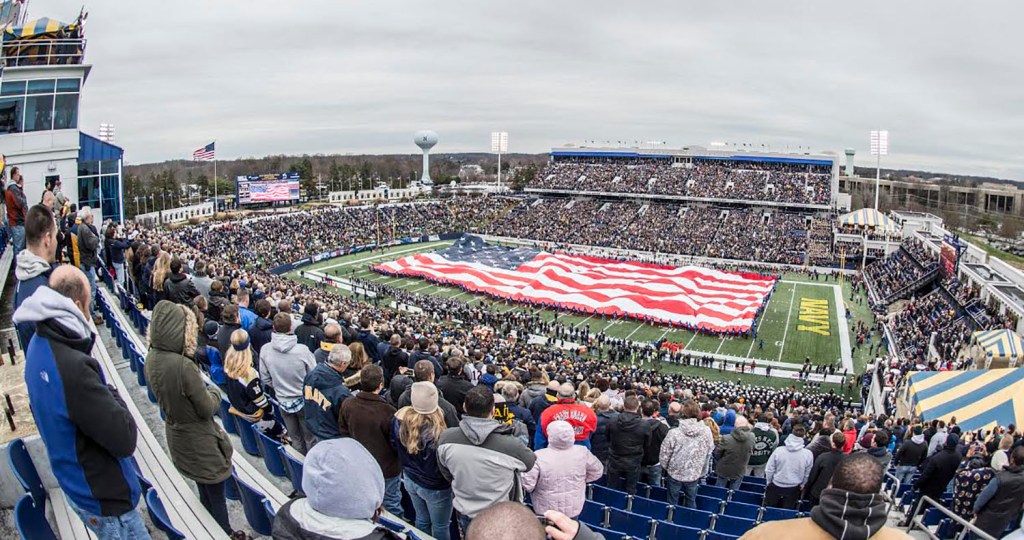 The Navy Midshipmen take on the Pittsburgh Panthers during the 2015 Military Bowl at Navy Memorial Stadium in Annapolis, Md., on Dec. 27, 2015. (Ben Solomon/American Athletic Conference)

Conrey Meagher played in one varsity football game in four seasons for Navy.

It’s part of the reason why the Oxford native ended his career with one of the academy’s more unique honors.

Meagher was recently presented with the First Lieutenant Ron Winchester Award at the team’s annual postseason banquet. The winner always receives a standing ovation because it’s an award that recognizes a senior that’s been a career-long overachiever and a role model as voted on by his teammates.

“He completely bought into the values and culture of this program,” Navy receivers coach Mick Yokitis told the Capital Gazette. “He was a shining example to the younger guys of what playing for your brother really means.”

Meagher was a two-time All-State selection at Oxford High before following in the footsteps of his father, Patrick Meagher Jr. — a 1991 Navy graduate who also played football at the academy. But Meagher spent far more time on the scout time during his time with the Midshipmen than in meaningful games.

He played in junior varsity games his freshman and sophomore seasons but struggled to crack a deep rotation at wide receiver, being relegated to the scout team again as a junior. Meagher, who moved to defensive back for his final season, didn’t play in a varsity game until the final minutes of Navy’s blowout win over Virginia in the Military Bowl this past season.

“I think it would be very selfish of me to quit the team just because I wasn’t playing,” Meagher told the newspaper. “I knew I could contribute Monday through Thursday to helping the team win on Saturday, so it was important for me to keep showing up every day. I had a job to do for Navy football.

“I’m totally happy and at peace with how things worked out.”

It was Meagher’s willingness to stick it out, exhibit selflessness in doing whatever the team needed him to do and set an example for others — the embodiment of the Naval Academy — that earned him an award that’s unlike any other doled out at the end of each season.

“I might be a bit biased, but I think the Winchester is the most important award we give out each year because it goes to the core of what we are looking for in a Navy football player,” Yokitis said.