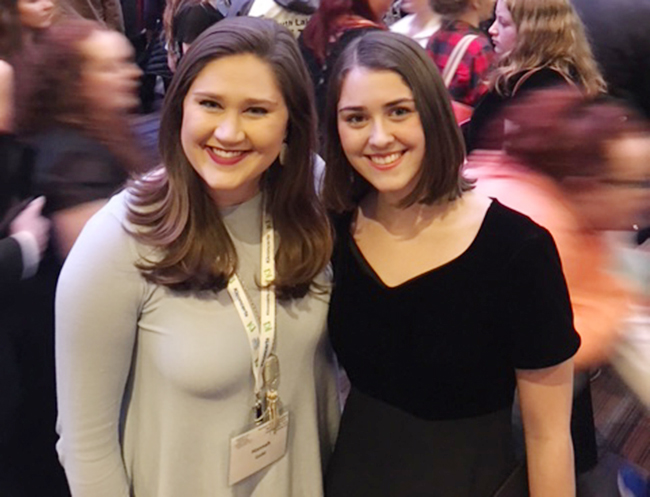 Hogue, who traveled to Louisville, Ky. last week for the performance, was chosen out of more than 1,000 students from 11 states and is one of only four students from Mississippi to participate in this year’s program.

Hogue, who has been in choir since the seventh grade, said singing is something that comes naturally.

“My parents say I’ve been singing for as long as they can remember,” she said. “I have been very blessed with opportunities to do what I love.”

Hogue and her family spent much of last week in Louisville, Ky. for rehearsals, workshops and the final performance. Overall, the nearly 300-member choir spent around 19 hours preparing for their performance under the instruction of Dr. Allen Hightower, Director of Choral Studies at North Texas University.

Hogue’s choir director, Hannah Gadd, was also in attendance as part of the choral directors’ conference, where she had the opportunity to work with over 600 instructors from across the country.

Gadd said the trip was a  tremendous learning experience.

“At this conference, I’m allowed the opportunity to go to multiple concerts a day to hear performances from the best schools across the Southeast,” Gadd said. “I’m then able to take that back with me and tweak it to fit our needs at LHS.”

Both Hogue and Gadd said being part of the ACDA Southern Division Honor Choir was a once-in-a-lifetime experience. The choir sang up to eight-part harmonies, something that Hogue said was a welcome challenge.

“Being in a rehearsal space with 240 strong and beautiful voices is a humbling experience, because you are one person of many,” Hogue said. “And yet, if even one student in the choir was absent, the whole group’s sound was affected. This was an unforgettable experience for anyone, let alone a high school senior.”

In addition to honor choir, Hogue and four of her classmates will participate in the Mississippi ACDA All-State choir next month.

Hogue, who plans to attend the University of Mississippi in the fall as a music education major and member of the university’s Concert Singers, Women’s Glee and University Chorus, said being surrounded by the best inspires her to reach even higher.

“If I brought anything back with me, it would be that yes, the quality of the voices played a significant role,” she said. “But it was the fact that every single voice gave 100 percent of their effort that made what could have been a great choir, and extraordinary one.”

The event introduced choir members and directors to new compositions, arrangements and overall styles of music, which Gadd said is an incredible opportunity for someone establishing themselves as a vocal performer. As an educator, Gadd said Hogue can only go up from here.

“Grace is at the top of her game in high school choral music. I think she now has a better understanding of what she wants to do in life,” Gadd said. “She’s an amazing person and singer, very talented and sweet. I’m so glad she got the opportunity to participate in honor choir.”