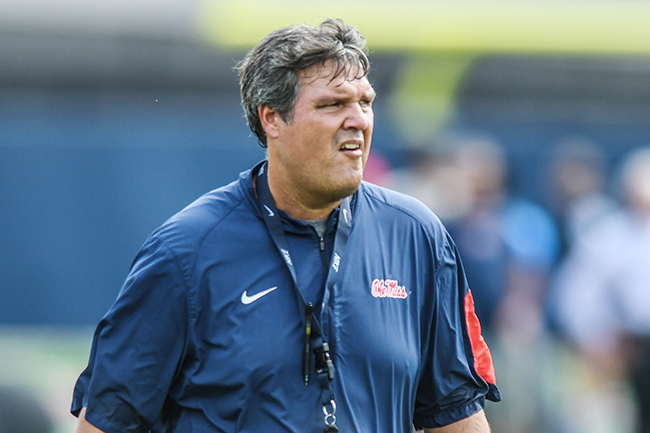 Matt Luke has some positions he needs to address this spring.

Ole Miss’ coach is trying to fill the void left behind by 1,000-yard rusher Jordan Wilkins amid a backfield that doesn’t have much proven depth. He has to find replacements for defensive ends Marquis Haynes and Breeland Speaks and leading tackler DeMarquis Gates. There’s also depth to sort out along the offensive and defensive lines.

But the top priority for Luke in his first spring as the Rebels’ coach is to continue putting his stamp on a program that’s hitting the reset button. Luke, taking over for the embattled Hugh Freeze, had the interim tag removed in November after leading Ole Miss to a 6-6 campaign that was clouded by the fallout of an NCAA investigation.

That cloud has dissipated pending an appeal of the multi-year bowl ban handed down by the Committee on Infractions. Luke said his team is preparing itself mentally for next season’s postseason ban to stick “and if something else happens, it’s a bonus,” but whichever way the Infractions Appeals Committee rules won’t affect Luke in his objective to establish a more cohesive culture, he said.

Luke’s biggest concerns on the field this spring lie in the first and second levels on both sides of the ball.

Center Sean Rawlings, defensive tackle Benito Jones and defensive end Qaadir Sheppard, another projected starter, are among those that will either be limited or miss out entirely on spring practice because of injuries, giving others a chance to catch Luke’s eye in their absence. Ole Miss is also losing Tayler Polk at middle linebacker after the former walk-on started the last three games last season, leaving both linebacker spots in flux in coordinator Wesley McGriff’s 4-2-5 scheme.

Senior Detric Bing-Dukes and sophomore Donta Evans also drew starts in the middle a season ago. Luke said Bing-Dukes and junior Willie Hibler, a converted tight end, will begin the spring as the first-team linebackers but acknowledged the position is “a huge concern.”

But for Luke, addressing any area starts with accountability that extends beyond the field.

“From the way that we’re dressed to being out at practice on time to showing up and everybody looks the same to the way the locker room looks, the little things I think are very, very important, and the discipline of the team,” he said. “ We just want to take where we are and continue to build on that.”

Luke said he didn’t necessarily sense those things being a problem during Freeze’s tenure. But it’s a point of emphasis as the Rebels start fresh under their new coach.

“I just think the culture and the environment that these guys are in is the No. 1 thing,” Luke said. “I think that’s big on winning and losing football games. There’s such a fine line on winning and losing football games in the Southeastern Conference, the culture of your team, and the discipline and the environment that you create and the mentality of your team when you’re playing close football games. To me, that’s the secret sauce. That’s the secret ingredient.”

Who’s in, who’s out for Ole Miss this spring?