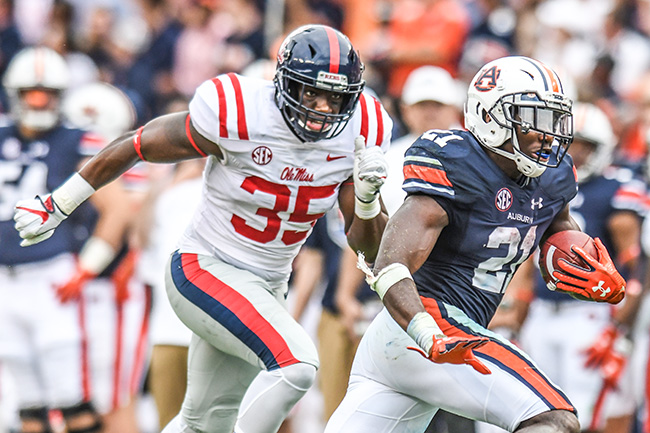 Editor’s note: This is the sixth of a seven-part series previewing each position for Ole Miss heading into spring football practice, which begins today.

Getting consistent production from the second level of the defense has been a struggle for Ole Miss in recent years.

Now the Rebels are faced with the task of trying to replace its most productive linebacker.

DeMarquis Gates led Ole Miss in tackles each of the last three seasons from his outside linebacker spot, including a career-best 114 last season, but he’s exhausted his eligibility after three seasons as a starter. The Rebels’ second-most productive linebacker last season was walk-on Tayler Polk (39 tackles), but he’s gone, too.

It leaves both linebacker spots in flux in Wesley McGriff’s defense, which has stuck with a 4-2-5 base scheme, with the Rebels still searching for consistency in the middle. Ole Miss doesn’t have a linebacker returning that had more than 24 tackles a season ago.

Ole Miss went back and forth between third-year sophomore Donta Evans (four starts) and senior Detric Bing-Dukes (five) in the middle before turning to Polk for the final three games last season. Evans and Bing-Dukes combined for just 41 stops last season, a level of production that’s going to have to increase considerably if the Rebels want to improve their 123rd-ranked run defense.

Junior Willie Hibler is an option inside or out, though the former tight end’s playing time has been scarce to this point with 22 combined tackles the last two seasons. Mohamed Sanogo got a cup of coffee last season (eight tackles) while fellow 2017 signees Josh Clarke and Zikerrion Baker will look to contribute after redshirting last season, though all three still have to prove themselves.

Mid-year enrollee Vernon Dasher is listed as a defensive back on Ole Miss’ spring roster, though the 6-foot-3, 215-pounder could play at the second or third levels after earning first-team NJCAA All-American honors with 98 tackles and three interceptions as a linebacker for Coffeyville Community College last season. Former junior college signee Brenden Williams played nine games at linebacker last season but has moved to defensive end.

Dasher is one of five linebackers the Rebels signed this year, but the rest won’t be on campus until the summer.