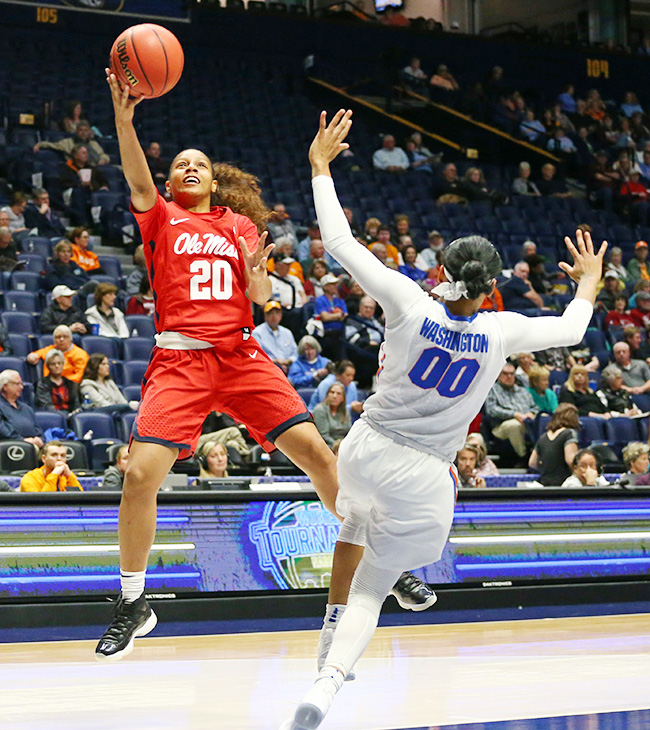 After 52 days Ole Miss is finally in the winner’s circle again.

The Rebels defeated Florida 48-43 in the first round of the SEC Women’s Basketball Tournament in Nashville on Wednesday. It ended a 13-game losing streak — the longest in program history — that started on Jan. 11.

Ole Miss’ last win came on Jan. 7 against the Gators and was their only win in conference play during the regular season. In the rematch in Gainesville, Ole Miss blew a 13-point lead and lost 61-60 on Jan. 21.

The script was following closely to the latter game as Ole Miss once again had as large as a 13-point lead but the Gators began to cut into the deficit after the Rebels missed their final 10 shots in the third quarter. Wednesday was different from their previous 13 games with Ole Miss finally able to get crucial stops on the defensive end.

The Rebels and Gators each shot 28 percent from the field. The Rebel defense forced 20 Gator turnovers and scored 20 points off of them.

The Rebel defense shutdown Florida’s best shooter on Wednesday. Funda Nakkasoglu averages about 12 shots a game and was held to seven attempts, making two of them and finished with 11 shots.

If Ole Miss wants to continue their season they must get past No. 14 Missouri and Sophie Cunningham. The Rebels faced the Tigers on Jan. 18 and lost 67-48. Cunningham scored 20 points.

“(Cunningham) is really, really good. We’re going to have to be really locked in to what we’re doing defensively,” Insell said. “It’s part of playing in the SEC. We’ll have something. We’ll figure something out.”